Taking Art to the Streets

Finding beauty on a billboard. 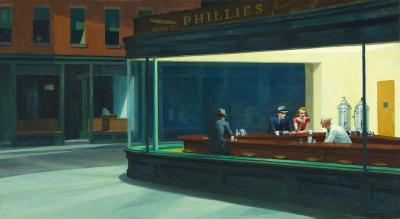 There's something distinctly American about billboards, especially when they have American art on them.

Perhaps you saw what I'm talking about on one of your daily commutes this past month. You might have caught a glimpse of Winslow Homer's Breezing Up (A Fair Wind) driving through the intersection of Peach and Liberty, or Jasper Francis Cropsey's Autumn on the Hudson on your way across town. There were others that you might have seen, too; American masterpieces displayed outside for all to see.

These examples of roadside artwork were not exclusive to Erie, however. Art Everywhere US represents the collective action of five leading American art museums: The Dallas Museum of Art, The Art Institute of Chicago, The Los Angeles County Museum of Art, The National Gallery of Art, and The Whitney Museum of American Art. Citing influence from Richard Reed's highly successful program in the UK in 2013, representatives from the five aforementioned museums selected an initial pool of 100 American paintings, eventually narrowed down by a public vote, to reproduce publically across the country.

Billboards, bus stops, and public benches were adorned with famous American paintings, including Wood's American Gothic, Hopper's Nighthawks, and of course Andy Warhol's iconic depiction of a Campbell's soup can. In all, 58 different paintings were chosen with the hope of acquainting both citizens and tourists of America with the art that best represents the nation as a whole. America is picking cotton in a field. America is hopeful grins while sailing into choppy seas. America is tomato soup.

The first time I saw one of these billboards in Erie I had to do a double-take (not a great maneuver to pull while driving). At first, I couldn't believe that art I could have seen in a museum was being used on a billboard. Then I couldn't believe that it wasn't being used to advertise anything in particular, as you expect a billboard to do. Maybe it was a cynical reaction, maybe, but it was undoubtedly refreshing to see something so overtly beautiful carving out the skyline that I so largely tried to ignore.

I think that moment of pathos stirred something up in me. I started looking up more, taking note of my environment and marking its effect on me. Great cathedrals on the lower west side. Murals on Peach Street. Prophetic marquees proclaiming that "Being brave lets no one off the grave". Even the word "Hack," tagged on nearly every conceivable surface in town, started to look better. Erie's post-industrial aesthetic began to come together before my eyes, not because it wasn't there before, but because I had never bothered to look for it.

Given the success of Art Everywhere here in the U.S., I am hopeful that we will see more programs like it in the future. Until then, take some time out of your day to look at what your city already has to offer. Visit the Erie Art Museum. Buy a sketchbook, even if you think you can't draw. Make an effort on your way into work or home from school to notice something that simply looks cool. Most importantly, try to look up; you never know what may catch your eye.

Chris Sexauer doesn't know much about art, but if you have any questions, comments, concerns, or opinions about this article he can be reached at csexaur@ErieReader.com