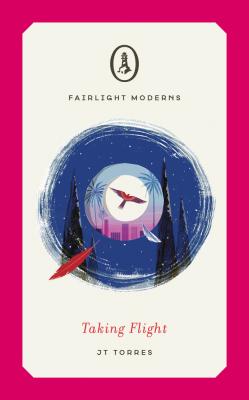 Taking Flight's release came on the heels of 11 novellas previously published in a series by Fairlight Books (based in Oxford, UK) called the Fairlight Moderns. These books are published through the company's open submission process so that means we get to read books written by people who have not necessarily been published on a large scale before. Additionally, all of the books in the Fairlight Moderns series are beautifully designed with original artwork and illustrations. Taking Flight is a perfect book to start on in this series and it is JT Torres' debut. It reads like a memoir, and it is, but the author also weaves in mystical elements. Torres uses this mysticism with such a matter-of-factness, that it all feels very real, like something the characters are actually experiencing. The publisher describes the genre as magical realism, and that is exactly how it reads.

The book is about the bond between a young Cuban-American boy (Tito) and his grandmother (Nana). Tito was born from an unplanned and unwanted pregnancy. So whereas he often feels invisible and unwanted in his own home, he finds he is the most at home with his Nana and the story forms from the progression of their relationship. Nana's life is full of magic and she attributes many of the events that happen in her world to her "illusions." As Nana's memory begins to fade, Tito feels himself start to disappear, literally, and cannot find a way to break the spell. As the story weaves through places (Florida and Alaska, specifically) and life phases (like a modern American coming of age story), the reader finds themselves magically connected to these two characters who are so bonded through time, space, and even death.  This book is witty and beautiful, surreal, bizarre and undoubtedly moving.  It is a quick read and a great introduction to the series, which I look forward to exploring more. – Erin Phillips