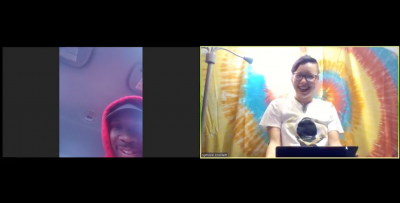 On the fourth installment of Tales Behind the Creative, we welcome local rapper, MC and music producer (and fellow Erie Reader contributor), Charles Brown (CEE Brown). Charles has been in the industry for about a decade now with a very impressive track record to follow.

Charles Brown was last seen on the stage at the King's Rook Club for the release of his album, "Sunset: The Charles Brown Collection." Before that, Brown could be spotted performing on stages all around the Erie community not only rapping, but performing with his band, The Charles Brown Experience, emceeing at a multitude of different local events and doing volunteer work to show support for his hometown. With three in a row best MC awards for Best of Erie (2017-2019), Charles is not to be slept on.

His most recent work is that of his music video release, "The  Real Virus" where he collaborated with his good friend Mike Golab, owner/founder of Xhibit One Productions. Charles came up with the idea for this freestyle because he was upset with how people's perceptions of the virus brought forth so much negativity. His hopes were that people would listen and take on a new perspective of keeping the ball rolling during these trying times and to continue whatever projects and activities that we were doing outside and bring it inside.

While he himself is stuck inside, Charles focuses on catching up on sleep and completing work around the house but also continually brainstorming and creating new music and ideas. He feels that the longer he is stuck inside, the stronger he will come out, as not only an artist but as a man too. He shares words of enlightenment by telling the people that the grass is always greener on the other side. "This is the perfect time for all of us to work on ourselves and focus on our family and futures," says Brown. He has personally been through mental illness and hopes that all who are experiencing it at this time continue to keep their heads up, get their mind and soul right through self-reflection and work towards the future with a smile on their face.

Charles is only getting started in the music scene, as he says he is still on "Chapter 1" of his journey. So if you want to continue to flip through the pages you can find more information on Charles via his Facebook and Instagram as well as listening to all of his music via Soundcloud and Youtube.