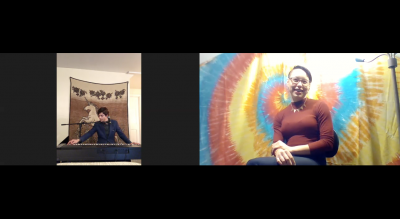 On the ninth installment of Tales Behind the Creative we welcome local musician, Nicholas Nasibyan. With a central focus on the jazz genre, Nasibyan does solo work as well as playing in bands such as the Chautauqua Jazz Revival (a.k.a Nicholas Nasibyan Trio), Dillon Shidemantle Trio, and with local musicians Michael Hibbler and Alex McLaughlin.

Nasibyan found a love for music around the age of four and started performing for crowds at the age of seven at local arts and craft shows that he attended with his mother and father (Igor Nasibyan of Silhouettes). In his later career, he is no stranger to the music scene in both Pennsylvania and New York as he has been busy performing at places such as Pineapple Eddies, Sneaky Pete's, Room 33, Riverside Brewing Company, The Chautauqua Institute, and most recently and frequently at The Crazy Oven during the past summer/fall. He also has a full-time job as the music director at St. Thomas Apostle Church in Corry, PA.

His last musical production was that of his music video release of "The Ballot of Bernie Sanders," where he pays a tribute to political parody performer, Mark Russell while paying homage to the enigma of modern politics, Bernie Sanders. Now being stuck inside during the quarantine, Nasibyan has set up a studio in his garage to focus on actually practicing newfound techniques (jazz chart books), spring cleaning and spending quality time with his father who is staying with him during this time.

He admits that he didn't pay much attention to the news that initially came out about the COVID-19 virus but has fear about the effect on the economy and the toll on people's livelihoods. He expresses sentiment for the closing down of non-essential businesses and social distancing even though he himself misses the interaction with friends in order to collaborate on new music projects. In his spare time he has been spreading positive vibes and uplifting people through conducting livestreamed Sacred Song Services for his church community to give them something to look forward to and sing-a-long with to provide a sense of normalcy given the amount of support he receives from the people involved in that institution.

He spreads words of advice to his fans/followers/friends in saying that we shouldn't give up as things will get better. Everything happens for a reason and we shouldn't stress during these times as a silver lining will present itself. Go outside and take advantage of the very important vitamin D and when you're stuck inside and lonely take the time to Facetime friends and reach out to him as he is always available to lend a helping hand in any way possible.