by Nick Warren
View ProfileTwitterInstagramRSS Feed
August 22, 2022 at 11:00 AM 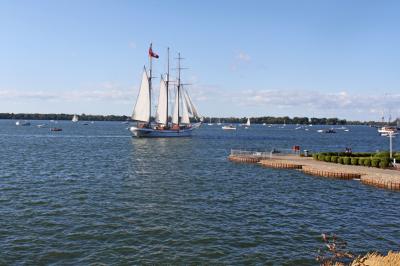 The bi-annual Tall Ships Erie will take place during the last weekend of August this year. Kicking off with the "Parade of Sails" on Thursday, with the festival grounds open the following day until Sunday.

This family-friendly event lets you see, board, and sail on historic ships, with a "Kid Zone" near the Maritime Museum.

Unsurprisingly, one of the main attractions is the U.S. Brig Niagara. Making its home port in Erie, it is an accurate reproduction of the War of 1812 flagship that fought in the Battle of Lake Erie under Commodore Oliver Hazard Perry.

Locals may also be familiar with the Lettie G. Howard, which has been in Erie on loan from the South Street Seaport Museum in New York City since 2018. "The Lettie" is a Fredonia fishing schooner, possibly the last surviving type of its kind.

Toronto's Empire Sandy is Canada's largest schooner, with a 200-foot topsail. Equipped with double cannons, it can hold up to 275 people.

Home to Bay City, Mich., the Appledore IV was launched in 1989, named after Appledore Island off the coast of Maine, where Herb Smith first met his wife Doris. The couple later commissioned the ship to be built by Mark Treworgy.

The St. Lawrence II docks in Kingston, Ontario. Now part of a sail training program, led by Brigantine Inc., it first launched in 1953.

Traveling the farthest, from Huelva, Spain, the NAO Trinidad is a replica of a square sail ship from the 1500s. Built to celebrate the city's 525th anniversary, it now travels the world. This year the ship will be telling the story of Ferdinand Magellan, as opposed to that of Christopher Columbus, as it was formerly known as the NAO Santa Maria.

The Pride of Baltimore II sails up from Chesapeake Bay to the port of Lake Erie, and is a reconstruction of a Baltimore clipper ship of the early 1800s.

Lastly, there are the eye-catching Mama and Baby Ducks. With Mama standing six stories tall, she is the world's largest rubber duck, and is accompanied by her as-of-yet-unnamed progeny.