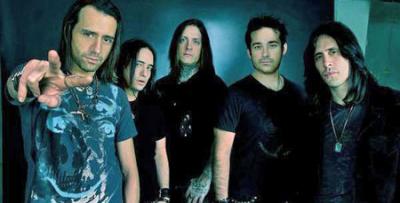 Ever since moving just a few blocks west from 1501 State St. to 145 W. 11th St., Basement Transmissions has been growing -- and not just in the amount of venue space.

Just shortly after opening their doors at the former Roadhouse Theatre, the folks at BT hosted the first Gem City Festival -- an sixteen-band, twelve-hour extravaganza -- to much acclaim.

Some would have been satisfied then and there and would've let the jets cool and would've been fine to take a deep breath and would've wanted to re-group for another big show a few months later.

Not Bob Jensen and crew.

In case you're not familiar with the Louisville, Ky.-based band, they struck it big in the early-2000s in the post-grunge, hard-rock vein after Days of the New frontman Travis Meeks decided to split from his bandmates but retain the band's name. That left guitarist Todd Whitener, bassist Jesse Vest, and drummer Matt Taul to find their own way up the musical stream. Impressed with Hugo Ferreira's powerful baritone vocals (think: Layne Staley-esque), they teamed up with him to form C-14, which then became Tantric.

After getting some significant radio play with their debut single "Breakdown" off of 2000's self-titled debut album, the band went on to release five more records, most recently 2013's 37 Channels, which the band -- with Ferreira as its only consistantly remaining member -- is on tour supporting.

In short, if you dig intricate and melodic guitar riffs weaving and surging behind powerful grunge-soaked vocals, this stuff's for you.

If you don't dig that stuff, you've got three other options for the night.

Aside from Tantric, the stage will see the presence of Erie's own Potwhole, an aggressive-folk/gypsy-tonkers and '70s/'80s classic metal-rockers Court of Mayhem. Chicago-based hard-rockers Emperors and Elephants rounds out the bill, making the show quite a steal at just $17 at the door.