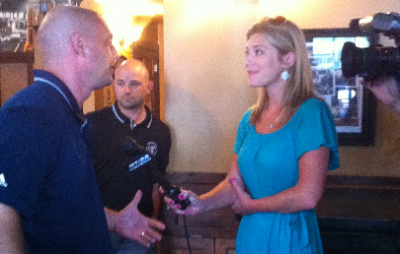 Minutes ago, the U Pick 6 Tap House on State Street held a ceremony during which they presented the Greater Erie Chapter of the American Red Cross with a substantial oversized novelty check in the amount of $10,305. The money was a raised as a result of their block party, held last week.

"As far as we knew, the previous record was $5,700 raised by the Plymouth [Tavern] last year, I think for autism," said Tom Brasco, managing partner of the U Pick 6 Tap House. Brasco told me that the money came from a variety of sources, including button and t-shirt sales, donations by Highmark and Northwest Savings Bank, as well as a percentage of tips from U Pick 6 Tap House employees, concession sales, an auction from Brian Sprague, artwork sales, a closest to the pin contest sponsored by Golf Etc., and the Erie Admirals. The Erie Reader was also a co-sponsor of the event, which featured live music by The Romantic Era and the M-80s.

The mission of the American Red Cross is to alleviate suffering in the wake of a disaster, so that people who are left homeless after fire, floods and other unforseen circumstances have the immediate needs -  like shelter, clothing, food, and emergency medical necessities - that will allow them to survive the days, hours, weeks, and months after that disaster. With few charities as worthy of support as the American Red Cross, Russ Stachewicz, owner of the U Pick 6 Tap House, gave some insight as to why they decided to participate.

Pam Masi, CEO of the greater Erie Chapter of the American Red Cross was clearly delighted with the outcome. "We're excited to be involved in this venue with the block party, and we're glad the Tap House chose the American Red Cross. They did so much work ahead of time in pre-planning, to figure out fun things that would raise money and raise awareness of disaster relief and the need for the Red Cross' services."

Indeed they did. The valiant effort by the Tap House team and their sponsors has set the bar that much higher for everyone else.

"Amongst both of our connections we all pulled in vendors and donors and got a great crowd down here and raised a lot of money that will be used for people who are homeless after disatsers," said Maci.  "We're excited that the city of Erie allows opportunities for businesses like this and charities to pair up and partner, all for the good of everybody – the community, the charity, and the people having fun down there."

Good job and hats off to everyone involved, especially the Tap House. I mean, what more can you ask of a good coprporate citizen than both serving us delicious beer AND raising money for charity that helps make our community better?

And a special thank you to the City of Erie; it looks like raising money for charity might be your "bag," as they say.