Bolero's flavors dance the fandango in your mouth 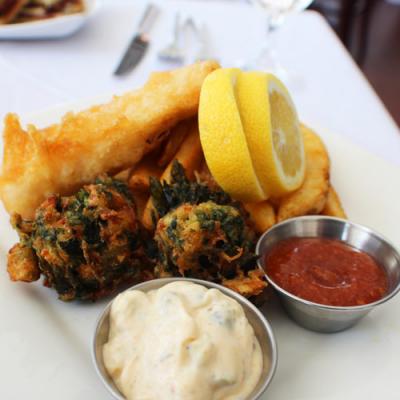 My friend Clark studied abroad in Seville, Spain during his undergraduate years, and he returned with a passion for all things Spanish. This included tapas, and he promptly ferried our friend group to the nearest tapas restaurant in Pittsburgh, authoritatively exposing us to the delightful method of sharing small plates, wine and much laughter among friends. Thus, my overall impression of tapas has been overwhelmingly positive, but the truth of the matter is that I didn't even realize Erie was missing a tapas restaurant until we actually — and finally — got one.

That would be Bolero, one of the newest players on the downtown scene, set in the lobby-level of Erie's long-established Avalon Hotel and Conference Center at 10th and Peach. What was once Benjamin's Pub and Eatery has been transformed into a bright, airy space with prints evoking Spanish culture adorning the walls, many of which contribute to a sophisticated and subtle red theme.

Jessica Farbo-Copeland, the food and beverage manager at the Avalon Hotel, told me that when she, Executive Head Chef Jodie Porter, and Director of Sales and Catering Irena O'Sullivan put their heads together to come up with a concept for the restaurant, tapas and Spanish-influenced cuisine was at the top of their list for several reasons.

"There were a few other items tossed around, but we knew we wanted to focus on something that was new and unique for the Erie area," she said. Another reason Farbo-Copeland cited was how Spanish flavors are so "versatile, and fit the palate of even the most picky eater." Hear that, picky eaters? The gauntlet has been thrown down.

"Opening right before summer was tricky," Farbo-Copeland continued, alluding to everyone's desire to be outside and on the water, but Bolero's reach has steadily widened since the restaurant's April opening, in no small part thanks to word-of-mouth concerning Porter's thoughtful one-of-a-kind creations. After nine years at the Presque Isle Downs and Casino, Porter's switch to Spanish cuisine in a full-service hotel is clearly a match made in foodie heaven.

I had the good fortune of grabbing lunch at Bolero, which is available Tuesday through Friday from 11 a.m. until 2 p.m. In the interest of doing a thorough job for the greater Erie community (the sacrifices!), more than a few delectable plates found their way to my table.

First and foremost, the short rib quesadilla, which is smothered with grilled peach BBQ sauce within and covered with mango salsa atop, was spectacular. When I told O'Sullivan that I had ordered this plate, she looked particularly enthusiastic.

The combination of sweet and savory, never a bad thing, was out-of-bounds delicious. Served with a generous portion of lettuce, sour cream and guacamole on the side, it has left me with a distinct longing and a certain amount of resentment that I can't have it every day.

"That's my favorite!" she told me. One bite, and I understood with perfect clarity why. The combination of sweet and savory, never a bad thing, was out-of-bounds delicious. Served with a generous portion of lettuce, sour cream and guacamole on the side, it has left me with a distinct longing and a certain amount of resentment that I can't have it every day.

The seafood platter was another great choice, and I found the salted cod fritters to be a particularly welcome treat, especially when paired with Bolero's house-made cocktail sauce and their creamy, tangy remoulade, which actually made me exclaim, "Capers! They put capers in this!" I hadn't had capers in a very long time, so finding them exploding with flavor in a dipping sauce accompaniment to a lunch-time seafood plate was a delight. It's the small things in life, people; Bolero knows this well.

Naturally I had to visit Bolero for its tapas, and my boyfriend Bryce, as well as our friends Bryan and Liz, joined me for the restaurant's happy hour, which is available Tuesday through Thursday evenings from 4:30 until 6:30. By the time we waddled out of there, stuffed to the gills with sauced meats, sangria and their complimentary house-made tri-color flour tortilla chips and salsa, I was convinced that Bolero is hands-down the best happy hour value in Erie.

For just $20, Bryce and I split four surprisingly filling tapas plates off the special happy hour menu: the pork belly a la plancha, steak empanadas (the previous two items are among the most popular on the menu), chorizo stuffed dates wrapped in bacon, and char-grilled asparagus. The pork belly and stuffed dates were so outstanding as to be the source of considerable tension when it came to dividing what was left after first bites were taken. We reached a compromise, but watching him finish off that last stuffed date, which was hugged close by a perfectly rendered strip of crisp bacon, made my heart lurch a bit, even as I inhaled what was left of the tender, juicy pork belly that practically melted in my mouth.

We took advantage of Bolero's fantastic paella Groupon as well; I ordered the shellfish version, while Bryce lived his best life with the three-meat. We had our paellas boxed to go, and once home couldn't resist a bite while it was still warm. Upon lifting the lids, a fragrant herb-and-spice-infused steam wafted upward, and we found the expected saffron evident in both taste (yummm — it's easy to understand why this is one of the most beloved spices in the world!) and color.

There is enough going on around Bolero in The Avalon to fill a city block in itself, from Afternoon Tea, to new sister restaurant Cheyenne Cattle Company Chophouse, as well as upcoming Monthly Winemakers' Dinners, holiday parties and family-themed events. But there is still so much more for me to try at Bolero, like the Spanish stuffed peppers — an Erie favorite with a Bolero twist — or the casuela de mariscos or the charcuterie plate or the…well, you get the idea. That's the thing I've discovered about Bolero: they make sure you don't leave hungry, but dang it, they'll leave you wanting more.