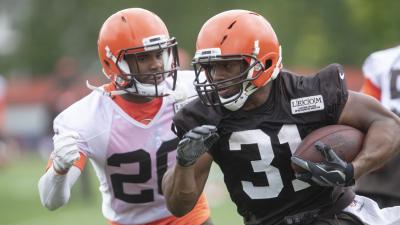 Although the Lake Erie College of Osteopathic Medicine has no athletics programs of its own, its recruiting efforts may be among the best in the country — incidentally through the other collegiate and professional programs with whom it has partnered.

If you watched HBO's Hard Knocks: Training Camp with the Cleveland Browns this summer, you might have noticed a familiar sight. Yes, dropped passes and missed tackles accompanied by flurries of expletives — Rome wasn't built in a day (or in this case, 20 years, but this year's roster offers a foundation). But those things are universal to all NFL practice fields; the "LECOM" logos affixed to the Browns players' practice jerseys and decorating press conference backdrops are not. Despite the Browns' repeated misfortunes, the fact remains that they represent one of 32 franchises in the most visible and most popular sports league in America, and their roster carries some of the most gifted athletes in the world.

The benefit of this is twofold, according to Pierre Bellicini, LECOM's director of communications and marketing. "If you look at your college or professional athlete, they are the epitome of health and wellness. Osteopathic medicine is about preventative medicine and helping the body heal itself … the bottom line is yes, it's a good marketing tool and helps market the school's name, but it also markets health aspects we care to promote. These athletes lead very healthy, very active lifestyles."

Not only do athletes exercise vigorously, eat right, and take care of their bodies, but they and their teams travel far and wide, and often inspire fierce loyalty. Such was the impetus behind LECOM's first partnership, with our own Erie BayHawks of the then-NBA Developmental League (now the NBA G League) in 2008. "They approached us with something new to the sports world — being a presenting sponsor of the team," recounted Bellicini. The LECOM logo can to this day be found on the court floor, attached to the BayHawks own logo, and throughout the team's advertising and marketing materials. "We were pioneers of that marketing. No matter where the BayHawks play, you see the LECOM name. This way we get our name out much further than we could by only advertising locally."

Since then, LECOM has allied itself with (in no particular order) the Erie Commodores FC, the Buffalo Sabres, the New York Jets (with emphasis on targeting Hispanic students through the Jets' Spanish-language radio station and newspaper), the PGA Web.Com Tour (the LECOM Health Challenge at Peek'n Peak Resort in Clymer, N.Y., observable by anyone in the 192 countries that receive the Golf Channel), and the Pittsburgh Pirates (McKechnie Field in Bradenton, Fla., where the Pirates hold spring training, was recently renamed LECOM Park. LECOM operates a branch campus nearby). LECOM also advertises in the Yankees' and Orioles' Grapefruit League facilities. In addition, the LECOM system provides the team physicians for the Commodores, Mercyhurst University, Mercyhurst Preparatory School, and Corry High School.

In regard to Mercyhurst University, Bellicini was excited to announce title sponsorship of the LECOM 2018 Icebreaker Tournament, the NCAA Division I ice hockey kickoff series being held at Erie Insurance Arena on October 12 and 13. In the tournament, the Lakers will host top-tier programs such as Notre Dame, Providence, and Miami of Ohio (all NCAA Champions within the past five years), drawing national attention from college hockey fans.

While not everyone makes it through to the final roster of an NFL team or to the final round of a hockey or golf tournament, partnering with the teams and athletes people care about will ensure that LECOM — and in turn, Erie — continues to make the cut.

Matt Swanseger is an unaffiliated former power-walking champion and has indubitably cursed at the Cleveland Browns more than any coach current or former. He can be reached at mswanseger@eriereader.com