Stranger Things star weighs in on the arts, acting, and life choices

by Jonathan Burdick
View ProfileTwitterInstagramRSS Feed
September 12, 2018 at 9:30 AM 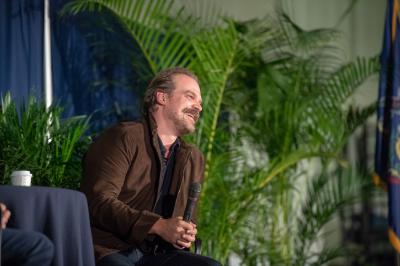 Harbour, of course, is widely known for his portrayal of Chief Jim Hopper on Netflix's Stranger Things, a role he will reprise again next summer for its third season. It's a part that has not only brought him global stardom, but will also bring him to the 70th Primetime Emmy Awards on September 17th with his second nomination for best supporting actor.

He already had an impressive career as a working actor, but his rise to international fame was more gradual. Prior to Stranger Things, he'd done a significant amount of work on stage and television and appeared in major films such as Revolutionary Road, Brokeback Mountain, and Quantum of Solace.

When I arrived on campus 90 minutes before the engagement was to begin, students were wandering around the university's Junker Center. Many were wearing Stranger Things t-shirts. Others carried memorabilia from the series.

I made my way to the room designated for interviews to wait for his arrival. A few minutes later, Harbour entered and he immediately began greeting everyone, shaking hands and introducing himself individually to each person in the room.

"Is there any coffee?" he finally asked when he was shown his seat. He'd been traveling nonstop recently, although if he was tired, it didn't show. He settled in as his coffee was brought over — no cream or sugar.

We were each introduced briefly again with what organization we were with — Erie News Now, JET 24, the Behrend student paper. The Erie Reader was described to him as the city's free alternative paper.

We were in a little better shape currently, I said, or at least I hoped so. The Village Voice, as was widely reported, shut down for good only a week earlier. He laughed — a hearty, genuine laugh.

Someone asked what he hoped to talk about with Behrend's students. He shrugged and said he was open to whatever came up. He wasn't coming to give a prepared speech.

"I love talking with students," he said. "There is a whole future generation of artists out there who I love to talk to and convey my experience and hopefully share something that will, you know, help them along the way or inspire them in some way."

Harbour kept it casual, which seemed to be his preferred way to interact.

Over the years, I told him, I've known so many teenagers, many of them my own high school students, who were passionate about the arts. When I'd first meet them, they'd be ready to fearlessly pursue the unconventional life of a struggling actor or musician or artist. Yet almost all of them, by the time they neared graduation, would change their mind — and there'd often be this twinge of regret behind their eyes as they told me they were going to aim for a more practical career.

"That light that begins to die is so sad to watch," Harbour said. "I think at 15, you can still live the dream a little bit, right? [Graduate and] be broke and go live in New York or wherever and try and be an artist — if you're in it for the right reasons."

His first acting role was as the Tin Man in his kindergarten production of The Wizard of Oz. Since then, acting was all he has ever wanted to do. Over the years, he would try other forms of art — the violin, writing — but acting was the only passion that stuck, the one constant in his life. He never really knew it was possible to make a living out of it though.

In the mid-nineties, he went to Dartmouth for college and decided to major in English and theater. "I was the anti-Dartmouth," he quipped.

During this time, he had similar feelings and doubts as many of my students had, he said. External pressures had him on the fence as to whether he should continue pursuing acting as a career.

"My parents wanted me to be a businessman and make money and were scared that I wasn't going to [make it as an actor]," he said.

It was around this time that Pulitzer-winning playwright and screenwriter Tony Kushner visited his campus for a speaking engagement. This turned out to be a pivotal moment for Harbour. After listening to Kushner speak, he was convinced that if he was going to do this acting thing, he had to go all in. It had to be his only plan.

"[When] Tony Kushner came and spoke, he said, 'when people tell you that you shouldn't go into the arts, they're the devil,'" recounted Harbour.

It didn't matter if it was family, friends, or otherwise, Kushner had stressed.

"It was so profound to me, because I had never had someone come say that to me. Everybody else told me to have a fallback plan," he explained. "Here was this man who was very successful at what he did telling me that I should just pursue it hardcore and view everyone who didn't want me to pursue it as an enemy, in a sense. It was the sort of dramatic take that I, at the time, needed to hear."

I joked about getting phone calls from angry parents asking me why I was encouraging their kid to go to drama school.

"Well, hopefully they don't have my phone number then, so I don't get those calls," he said, laughing. "I'm a bit of a punk in my essence and in my core. I'm a bit of an artist and a trickster and, you know, I believe in sort of tearing up the status quo for what people expect you to do."

Despite his encouragement, he's still upfront concerning the challenges of making a living as an actor.

He added that being an actor was not much different than being a plumber. Both are people with a set of skills. "We are an occupation," he said. "We are a trade. We are craftsmen, in a sense, of the psychology of a character."

So, when times were difficult, what were the origins of his drive to push forward?

On the plane that very morning, he had watched The Zen Diaries of Gary Shandling. Shandling was one of his favorite comedians when he was young and the documentary explored some of his personal writings.

I asked if this was a continuous cycle of self-doubt with those occasional moments of thinking, "Hey, I guess that was okay."

"I wouldn't call it self-doubt, I'd call it dissatisfaction," clarified Harbour. "In that way, it's more like the fact that you can constantly look at the canvas and continue to paint. Part of it is just the dissatisfaction with things being what they are — even when they are pretty good."

He noted how fame came later for him than some of his actor peers such as Billy Crudup and Ethan Hawke. He couldn't see it at the time, but for him, this was likely for the better.

He appeared sincerely unsure as to where his career is headed, but if he keeps getting interesting projects, he will be happy, he said. "I'm in it for the art. I just want to continue to create beautiful things that move people."

About thirty minutes later, Harbour was on stage in front of an audience of hundreds. Behrend's chancellor, Dr. Ralph Ford, briefly introduced him, then turned it over to Harbour, who spent the evening taking questions from and engaging with the enthusiastic and starstruck audience.

Those things are what connect us as humans, he stressed.

One thing is for sure: Harbour has a way of connecting with others.

He also will be a very familiar face over the coming year. Besides the new season of Stranger Things and his appearance at the Emmys, he will also be in theaters this January as the half-demon protagonist in Neil Marshall's Hellboy reboot.

The three hours of makeup each day was awful, he confirmed during the event, but the film is going to be something special.

With Harbour as the lead, I don't doubt it. I'll be there opening night.

by Jonathan Burdick8/29/2018, 9:15 AM
A brief history of Erie's newspapers
David HarbourStranger ThingsHellboy