Crown the Empirec continues their full "Welcome to the Resistance" tour, as they roll through Basement Transmissions. 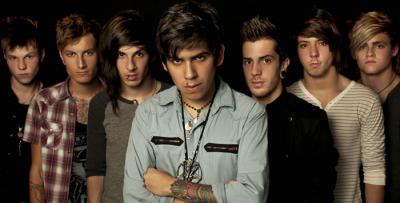 On Sept. 11, Dallas, Texas metalcore group, Crown the Empire, will once again be coming to Erie as one of the final stops on their full "Welcome to the Resistance" tour.

Crown the Empire's second full-length album The Resistance: Rise of the Runaways charted at No. 7 on the Billboard 200, selling 24,000 copies on its debut week of Aug. 9, and reached the No. 1 spot on the iTunes Rock charts. The band has received a lot of praise for their album, including a four-and-a-half star review from Alternative Press.  With those kinds of credentials, they must be doing something right.

The supporting bands on the bill include Volumes, Ice Nine Kills, Secrets, and The Family Ruin, all who share the same metalcore/hard rock sound, and toured alongside Crown the Empire all summer on this year's Van's Warped Tour.  After touring all over the biggest cities in the US, they've decided to come back to little ol' Erie for the first time since April 2013.

In my opinion, Ice Nine Kills is the most interesting band on this tour.  The Boston-based quintet formed in 2006 as a pop-punk/ska band and did a complete 180 with their sound to become the metal heads they are today.  If you're lucky, you might just get to catch them playing songs from both of their distinct, but polar opposite genres.

Earth Crisis' performance at Gem City Fest on Aug. 2 has started a domino effect at Basement Transmissions, and big shows are finally happening in Erie again.  Don't miss this chance to see Crown the Empire and more in a more intimate setting in Erie before these acts inevitably start selling out arenas. – Tommy Shannon