That American Song of the Summer

Instead of mourning the end of summer, celebrate it with music lovers and makers from across the city. 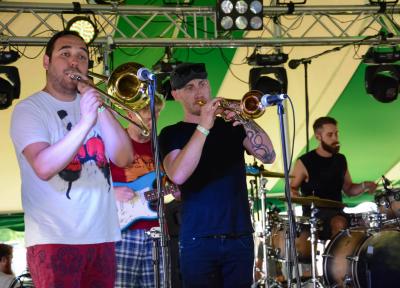 As summer's end draws nearer, the local musicians that many know and love continue to play on into the warm nights. On Aug. 17, three Erie acts are coming together for an exciting set at Bourbon Barrel. Doors open at 8 p.m.

Starting off the night at 9 p.m. is folk-pop singer Brooke Ashley Surgener. Surgener has been playing shows all summer — including sets at The Gathering at Chaffee's, Gears and Grub, and Discover Presque Isle. Surgener recently set up a Patreon account to help fuel her constant stream of creative output, which often incorporates her passions for cosplay and geek culture. This is no more evident than on the inventive music videos she dreams up, which include 2016's "Be Your Babe" (which features characters from the Legend of Zelda video games), a cover of *The Little Mermaid's "Kiss the Girl," and an upcoming Inuyasha-themed production as well.

Cult Classics vocalist Sprague has been known to play a role in all three acts, frequently joining Surgener on stage and, alongside Cult Classics' Royer, provides backup vocals for This American Song for certain tracks.

This American Song, of Presque Isle Records, shares a hometown with both bands, and the sextet will share a stage at Bourbon Barrel as they headline the evening. Continuing on the indie rock vein, This American Song layers classical instrumentals (such as muted trumpets) with lo-fi effects and vocals reminiscent of indie rock such as The Front Bottoms and Mom Jeans.

Instead of mourning the end of summer, celebrate it with music lovers and makers from across the city. — Hannah McDonald