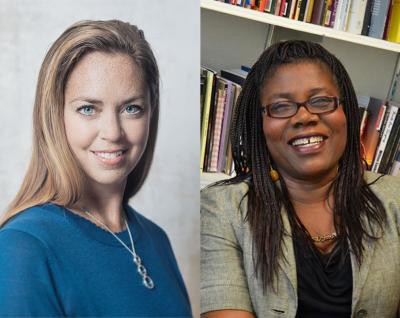 authormariebenedict.com / altoona.psu.edu
Authors Marie Benedict (left) and Patricia Jabbeh Wesley will read from their works at the Mercyhurst Literary Festival

The Mercyhurst University Literary Festival is ready to open the book for a third decade. And as usual, the table of contents looks quite compelling.

Throughout the month of April, various virtuosos of the written word will stop onto campus to read selections from their work and provide advice to students of the craft — whether they currently attend Mercyhurst or not (all events are free and open to the public). The wordsmiths slated to appear at the 20th Lit Fest are as follows:

It's often been said that "behind every great man is a great woman" — therein lies the premise of prestigious litigator/bestselling author Marie Benedict's historical novel series, which reimagines the lives of the brilliant but unheralded women whose stories are too often lost in the shadows of prominent men. Among them are The Other Einstein (Albert Einstein's first wife Mileva, also a physicist), The Only Woman in the Room (inventor Hedy Lamarr), Lady Clementine (Clementine Churchill, wife of the British prime minister), and Her Hidden Genius (British scientist Rosalind Franklin, discoverer of DNA's structure).

After reading passages from her novels, Ms. Benedict will field audience questions and be available for book signings.

Within the folk music tradition are some of the most talented lyricists to ever live, many of whom are fortunately still living. On this night, area musicians will take the Taylor Little Theatre stage to pay homage to the likes of Neil Young, Pete Townshend, Simon and Garfunkel, Gordon Lightfoot, and many others. All of these singer-songwriters recorded their first song prior to 1982 and continue to carry on 40-plus years later.

Since immigrating to the United States with her family in 1991 to escape the ravages of the Liberian Civil War, Patricia Jabbeh Wesley has made quite a name for herself in the world of literature, authoring six books of poetry (most recently Praise Song For My Children: New and Selected Poems and When the Wanderers Come Home) and children's book (In Monrovia, the River Visits the Sea). Social conscious and lyrically sharp, the professor of English, creative writing and African literature at Penn State-Altoona has been honored with a number of awards in her career, including a World Bank Fellowship, a Crab Orchard Award, and a 2016 Wise Women Literary Arts Award.

The concluding event of the Lit Fest turns its attention to homegrown talent in the form of creative writing, English, and graphic design students.

Additionally, four P. Barry McAndrew Writing Awards will be presented — three for the most outstanding works of creative writing and one for the most excellent piece of literary criticism. Students will be invited to the podium to share their output.