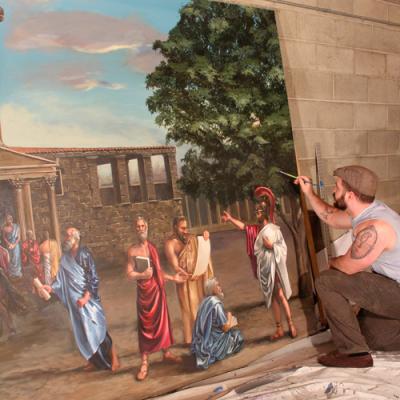 Though they limited human equality to a privileged few, Thomas Jefferson and his contemporaries idealized principles such as the right of property, religious tolerance, and freedom of thought that they felt were embodied in the great republics of the past: Greece and Rome. You can see evidence of our young country's obsession with all things classical in the architecture of our public spaces.

So the Jefferson Educational Society (JES) decided to follow this grand American tradition of paying homage to ancient Greece by commissioning a grand painting. This painting would cover the entire east wall of their lecture hall and dominate the space with its massive size: 30 feet long by seven feet high. The painting was to be of the Agora: the center of cultural, political, and intellectual activity in many Greek cities, most notably Athens; and an apt representation of what the JES hopes to be for Erie.

The painting was to be of the Agora: the center of cultural, political, and intellectual activity in many Greek cities, most notably Athens; and an apt representation of what the JES hopes to be for Erie.

Who better to undertake this monumental enterprise than Michael Hinman, who had worked in conjunction with JES when he painted the Perry 200 shipyard mural. You've likely admired it as you've traveled down State Street. Hinman has a special affinity for paintings that depict classical culture, as he studied the Renaissance masters during his days at Temple University's Tyler School of Art. One of his favorite paintings has always been Raphael's The School of Athens, which happens to be the very subject which he and the JES were proposing for the painting.

Quite overwhelming to consider reimagining one of the great monumental paintings of all time, done by the great master himself, Raphael. But Hinman was undaunted. He states, "I'm not as good a painter as Raphael, but I have better information than he did. Better resources and research." He could also use the expertise of the Renaissance masters to help him with the composition and technique. His materials would be of far superior quality as well.

So he began … by stretching a 290 square foot piece of canvas over a custom stretcher, designed with one-of-a-kind braces so it would not warp. (To give you an idea of the scope of this project, just moving the painting from one room to another takes eight people.) Then came three coats of gesso, a rough acrylic underpainting, each needing to be sanded to a fine finish before the next coat. Of course, to be historically accurate, he needed to do exhaustive research. His preliminary sketches for the figures are currently on display at the JES. Before he was done painting, he had put in more than 2,000 hours and travelled to Athens itself. 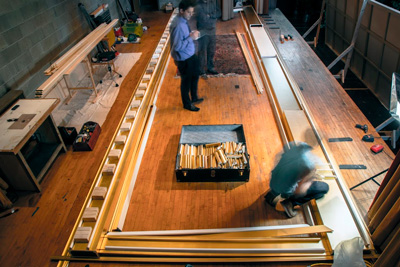 Once it came time to frame and hang this massive painting, the JES turned to another expert, artist and woodworker Brad Triana. The frame would have to be engineered to hang separately from the painting, be lightweight, never twist or crack, and do justice to the space in which it was to be hung as well as the painting. After calling every framer, moulding company, and woodworker he could think of, as far away as Texas, Triana decided that the job of designing and constructing an appropriate display could only be done here, on site, by himself. And before he was done, he and a throng of helpers had applied three coats of a special gold gilding and six coats of primer, built a special pneumatic arm, bounced ideas off of artists and makers he has worked with nearly every day, and spent two weeks hanging everything. The achievement of these adroit craftsmen is impressive to say the least. The final mural does justice to all that Jefferson and his ideals of classical democracy stand for.