Brilliant, Timely, and Necessary: A must-see for Erie 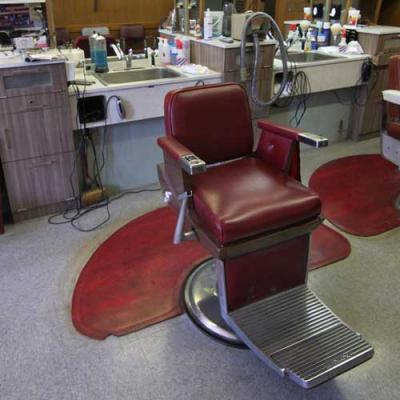 A man walks onto the stage and sits down in a chair. He connects a long cable streaming from a television situated at the top of the set to a laptop. We see what he sees: a picture of an adorable cat – the audience awwwws; a provocative image of two people embracing – the audience ohhhhhs; he continues searching – the audience learns in, waiting to see what comes next.

But something is wrong. These fleeting images, culled from simple searches, fail to satisfy beyond a mere moment – that's a cute cat, but it's not his, or our, cat; that couple is feeling something, but we're not them, we're not there, we're not present.

The young man unplugs the laptop and the TV screen goes black, and with hunched shoulders and a furrowed brow spins his chair, turns to the audience, and confirms our concern: "Something is wrong, something's… happened.

"All we can do is try to understand," laments Justin Moyar, star of Richard Boler's new, original comedy "The Bad Haircut: A Disconnected Comedy," now on stage at the Renaissance Theatre.

From there, the play moves quickly in the form of – as the title suggests – disconnected sketches, set into motion with the versatile Leslie Ford (who also directs the show) playing a Russian barber who gives the narrator his fated bad haircut, which sets him off on a journey to find himself by heading west.

An intellect's delight, "Haircut" is a thinking man's play, grappling with the notion of humanity's disconnectedness through religion, philosophy, psychology, medicine, materialism, and spiritualism while using comedy as the vehicle to drive through the myriad challenges and issues we face in contemporary culture, keeping the production grounded in a disturbingly poignant humor.

The entire cast – six actors taking on multiple roles – breathe life into Boler's cuttingly written archetypal characters as people populating everyday life. From an overly obsessed craft beer trendster – a wonderful interpretation by Scott Frisina – who's playing fantasy fantasy football to a trio of women out on a girls' night glued to their smart phones – the troupe transcends stereotypes to reveal a very human aspect of all of the characters, resulting in a touching element all too often missing from sketch comedy.

Two particularly strong scenes reveal Boler and crew's ability to use humor in unnerving situations rooted in disconnection to examine Boler's notion of inertia and "stuckedness."

First, John Stockhausen – playing an HR worker too self-engrossed to realize an employee has no idea what he actually does at work – struggles to make reservations at a bed and breakfast while stuck in the loop of a voicemail tree. Connected to a recorded automated response, who's played on stage by Karen Schelinski, Stockhausen's HR rep just "wants to talk to somebody." With the selection of "make a reservation" not being an option, the computer system ushers him along in the process, and Stockhausen continually shouts, overly enunciating "something else," each time hanging on the audiences' laughter. But Schelinski's endearing recording tries her best to help him, unable to empathize with his frustration, which then transitions into a beautifully haunting song sung by Schelinkski.

Second, Camille Jones enters Y-mart – a store featuring just one of everything ever needed and wanted but doesn't actually sell any of its products – looking for someone simply to pay attention to her, since she feels severed from the world around her. Moyar's protagonist, now an employee there, connects with her, finding solace in knowing he's not alone in his feelings of disconnectedness. Jones delivers a powerful monologue, perhaps the show's best – a diatribe fueled by barbed one-liners railing against what America's become and is becoming – leading to one of the most genuine connections between two characters in the play.

Brilliant, timely, and necessary, "The Bad Haircut" demands us to think and deserves our attention. Those already tuned in to Boler's observation that "something is wrong" will revel in that feeling of connectedness through shared disconnection. For those not tuned in, this may just be the necessary alarm in the form of cultural commentary via comedic theater that challenges us to think about the world and the people around us. And if it's not a wakeup call, it's still one hell of an enjoyable and thoughtful ride.

Three performances of "The Bad Haircut: A Disconnected Comedy" remain: July 24 to 26. Friday and Saturday performances are at 7:30 p.m. and the Sunday matinee is at 2:30 p.m. All performance are at the Renaissance Theatre, 1001 State St.