The Bocce Winter Classic Derails the Winter Blahs at the Brewerie

Few things emphasize togetherness like the sport of bocce. 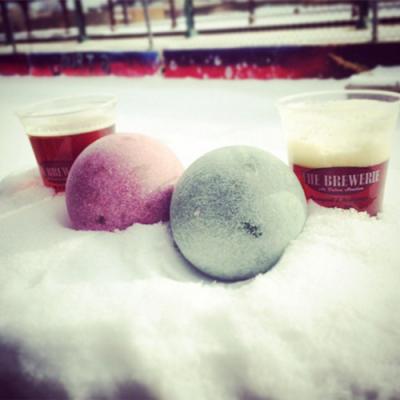 From the rules of the game to the culture surrounding it, few things emphasize togetherness like the sport of bocce. As the bocce (balls) closest to the boccino (little ball)/pallino (bullet) earn points in competition, the game itself has scored highly with communities that gather around it whenever or wherever it is played – which can be virtually anytime, anywhere.

For example, you might play it at a sun-drenched villa along the Mediterranean shoreline in mid-June, a glass of Limoncello in hand as you roll onto a traditional sand/crushed oyster shell surface (authentic bivalves only, please … spare me that synthetic rubbish). Or maybe within a cavernous boccio dromo, or "bocce dome," the chatter of your amici echoing off the canvas as you roll onto a regulation-sized 91-by-13-foot soil and asphalt court.

Or, if you're more adventurous, perhaps in a fenced-in patio beside a set of railroad tracks during the dead of winter?

This year marks the fifth anniversary of the Brewerie's Bocce Winter Classic at the Trackside Bar. The event is an homage to both Erie's droll custom of hosting warm-weather sports tournaments in the bitter cold (e.g., the Frostbite and Barstool Opens) and the city's rich Italian heritage of which proprietor Chris Sirianni is a part. He has installed three gravel bocce courts on the premises since moving in, thanks to the immense popularity of the Brewerie Summer League on Monday nights from June through August.

Geographically, the Brewerie lies on the outskirts of Erie's historic Little Italy neighborhood, which is centered at 16th  and Walnut streets, mere blocks away. Prior to World War I, the vast majority of Italian immigrants were concentrated in this area, which had expanded to nine city blocks by 1911. In the intervening century, most of their descendants migrated out of Little Italy, generally settling in the upper west side or Millcreek. Nonetheless, strong reminders of its legacy remain. St. Paul's Church, located at 1617 Walnut Street, still puts on the wildly successful Italian Festival each August. Just down the street, at 1518 Walnut Street, you can still find the headquarters of La Nuova Auora Society, 108 years after its establishment. The club features four bocce courts (two indoor, two outdoor under a covered pavilion) and accommodates numerous men's and women's leagues year-round.

Whether you're a statesman (as Caesar Augustus suggested of bocce players in the early A.D.'s) or a scoundrel (as the Catholic Church suggested of bocce players in 1702, when they formally condemned the sport for promoting gambling and prohibited clergymen from partaking altogether), there's no question the game can help you break the ice – socially and, in this case, literally.

Registration forms for the single-elimination tournament are available at the Brewerie's website and must be completed before Jan. 11. The registration fee of $100 per team or $25 per person covers beer, a lunch buffet, hot chocolate, and coffee.