The Boys is the Best Rowdy Action On TV

by Nick Warren
View ProfileTwitterInstagramRSS Feed
October 21, 2020 at 11:30 AM 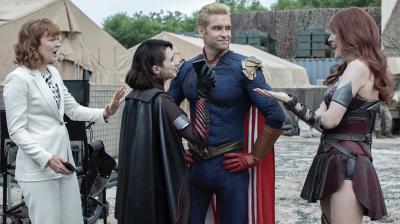 Amazon Studios
The Boys thwarts superhero fatigue with its cheeky cynicism and more honest account of how superpowered humans would function in the real world, even as their circumstances grow increasingly ridiculous.

Maybe you're experiencing superhero fatigue or maybe you aren't. We haven't had a Marvel movie in over a year, after all, so who knows? Virtually every streaming network has their own ensemble show, like The Umbrella Academy, Watchmen, or even Doom Patrol. While it's far from perfect, The Boys does its job better than the rest. A cynical take on what a superhero team — known as The Seven (a parallel to DC's The Justice League) — would be like in the real world, the series is based on the 72-issue comic book series by writer Garth Ennis and artist Darick Robertson. The source material often relied heavily on shock value and playing to the most extreme scenarios conceivable. While there are plenty of things shocking in this series, that's just one facet of why this show is so enjoyable. Sure, the characters have tongue-in-cheek/stupid names, like Homelander, Mother's Milk, and Black Noir, but some of these characters are truly captivating. [Spoiler Alerts ahead] This season grapples with The Seven's newest member, Stormfront (get it … because of the racist message boards) as the team finds itself down a few members. Hughie (Jack Quaid) tries to make things up to Starlight (Erin Moriarty), Butcher (Karl Urban) comes to grips with season one's cliffhanger, and Vought (the all-powerful company funding the team) goes public about Compound V (the mysterious serum creating all these powers), and blurs the lines of public and private industry. Is Season Two better than Season One? No. It does build on everything you loved in that first adventure though, showing no signs of slowing down no matter how ludicrous the plot becomes. Comic readers will notice significant departures from Ennis' plotlines, thanks to showrunner Eric Kripke (Supernatural), and the changes seem all for the better. Overall, it's a fast-paced and exciting show that's easy to rewatch if you're so inclined. Though it's not for everyone, The Boys is some of the most fun TV out there today. — Nick Warren