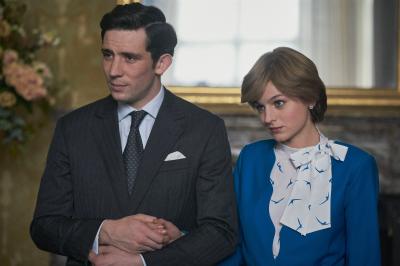 The lives of the British royal family have always been mysterious. To the public, there is a front of perfection and propriety that is expected of its members, rendering it virtually impossible for everyday citizens to know what goes on behind closed doors. That's exactly where British screenwriter Peter Morgan's Netflix series The Crown comes into play.

With its first season released in 2016, the show drew millions of Netflix binge-watchers globally through its three seasons. Its fourth season, released in November, garnered a whopping 29 million views in one week — more than the number of Brits who tuned in for the actual wedding of Prince Charles and Princess Diana in 1981.

Season Four of The Crown is undoubtedly the most enthralling, emotional, and personal season of the series thus far. At the start, we meet two new figures: Prime Minister Margaret Thatcher (Gillian Anderson) and Lady Diana Spencer (Emma Corrin). With the introduction of the UK's first female prime minister and the heir to the crown's future wife, it is clear that the royal family and the country is in a transitional state, and that viewers will be watching this unfold throughout the season.

The season starts with the same propriety as is custom for the family, but as the years (and episodes) drone on, the Queen's (Olivia Coleman) world is turned upside down by scandal -- both political and familial. Though Charles' (Josh O'Connor) proposal to Diana goes off without a hitch, it becomes evidently clear in the third episode, misleadingly titled "Fairytale," that his heart belongs to another, his former girlfriend Camilla (Emerald Fennell).

From there, it is a slow downward spiral for the couple, as they become hostile and withdrawn from each other until their tour of Australia in 1983, during which they reconcile as Charles convinces Diana he loves her because she is his wife.

On the political side of things, Thatcher's storyline is nothing short of tumultuous and historic. It is marked by upheaval from the start, with Lord Mountbatten being killed by the Irish Republican Army in a successful assassination attempt. Thatcher then declares war on the IRA. In the season's fifth episode, a man named Michael Fagan (Tom Brooke) has an unexpected audience with the Queen in her own bedroom. The break-in is a result of Fagan's displeasure with Thatcher's policy -- that hard work is all it takes to get ahead -- while the country is facing record rates of unemployment.

The end of the season is a culmination of the turmoil that has ensued since the first episode. Thatcher is basically thrown out of office by her cabinet, breaking down emotionally under the stress of it all. At the world's most uncomfortable Christmas party, Diana realizes she wants out of the royal family after a run-in with Prince Phillip (Tobias Menzies) that appears to have a threatening theme to it, marking the beginning of the end of her marriage to Prince Charles.

The fourth season of The Crown is a perfect "fictional" portrayal of life inside the royal family. The question still remains, though, of exactly how fictional the series really is.