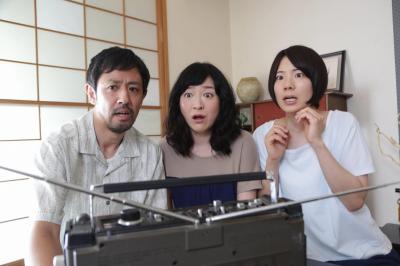 Zombies are quite possibly the most malleable movie monster in history. They've been slow, fast, stupid, smart, metaphors for just about every societal problem that has ever existed, and they have managed to permeate every aspect of pop culture — from film to television, comic books to video games, and everything in between. In Shin'ichiro Ueda's delightfully inventive One Cut of the Dead, zombies are now being used to tell a story about the impossible task of making a film itself. Horror fans who think they've seen everything under the sun now have the pleasure to witness this modern masterpiece themselves thanks to streaming site Shudder.

Following the cast and crew of a low-budget horror movie, things go from bad to worse when the director (Takayuki Hamatsu) decides to up the realism factor by turning various crew members into actual zombies! Now, this small band of actors has to fight to survive while their mad director desperately tries to get all the shots needed to complete his film.

Most talk of this film centers around the first act, which amazingly contains all the action in one unbroken, 37-minute shot. However, after that breath-taking opening, it gets even more interesting as the film goes back in time to show us how we got to this point. To describe what happens in the film would take away its impact, but suffice to say, very few films have captured the pain, stress, and euphoria of making a low-budget film like this. The best thing I could say of this film is to see it with as little knowledge as you can. It contains more thrills, twists, humor, and heart than we expect from zombie flicks. One Cut of the Dead is currently available on Shudder.