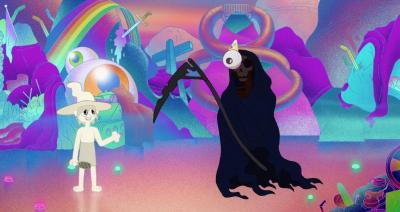 Genre tags like "Adult Animation," "Surreal Animation," and "Dark Comedy" don't come close to nailing down what The Midnight Gospel — the beautiful, glorious mindf**k released on 4/20 by Netflix — is all about.

Direct from the uber-expanded minds of Adventure Time creator Pendleton Ward and comedian/podcaster/psychonaut-extraordinaire Duncan Trussell, the eight-episode series has its main character, an Earthling-abroad "spacecaster" named Clancy (that's Trussell) diving head-first into his not-always-trusty universe simulator and traversing beyond-trippy worlds in which he and those he meets explore matters and manners of living, dying, and all the existential rips and ripples in between.

Set in Pendleton's disturbing and beautiful psychedelic dreamscapes and adapting conversations directly from Trussell's deep-diving Duncan Trussell Family Hour podcast, the show features Clancy's (that's Trussel's) conversations with a revolving and evolving cast of thinkers, writers, talkers, and doers: Dr. Drew Pinsky, for example, as a little president on drugs, writer Anne Lamott as a wisdom-rich deer-dog, guru Ram Dass as guru Ram Dass, Buddhist teacher/musician David Nichtern as God's scientist, and — in a final episode that left both my wife and me in free-flowing tears — Trussell's dying mom as Clancy's dying mom.

With its toes dipping (usually at the very same time) in both calm and cataclysm, The Midnight Gospel is deep and challenging and fantastic and fun, much like the psychedelic experience itself — and, we found, just what these precarious times call for.

Sitting in the dark of our living room late at night, with a scary and getting-scarier world just outside our door, it was one binge-watch that really did serve us as good medicine.

We humbly thank Ward, Trussell, and everyone else involved for that — and we really hope there are more adventures to come. — Ryan Smith