It's a monster; it's a criminal; it's a man; it's dance. What is "the Dougie?" Cornell Green schools us. 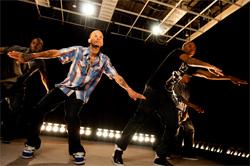 If "the Dougie" was a monster or a criminal, it might never be caught.

It's too fast. Too wild. Plus, you'd never get a positive ID on the sucker.

If you're a recluse, are tragically unhip, or have been living under a rock for the past year, you probably have questions.

Namely, what is "the Dougie"? Why do they call it that? Why should I care?

Or... There is that rare case that you might be an Erieite. That secluded little pocket of Pennsylvania is notoriously late on trends.

Some say the mysterious mist that hangs over its lake, has a chemical composition that dissolves trends as they float toward the city.

After all, the un-hip have questions too, right?

"The Dougie" is a dance. A hip-hop dance—sort of. But then again, sort of—not.

The thing with "the Dougie" is that, well, it's sort of hard to define. You know it when you see it, but it's difficult to reconstruct. Amorphous may be the correct term. But then again, it's also very specific, so maybe not. It's dynamic. Its mythic mystery depends on many interdependent factors executed precisely—cyclically—but in a rapid-fire, top-of-the-giant roller coaster, panting and on the brink of destruction, type fashion.

It's like Sasquatch. It's only captured in blurs, scattered spurts. Witnesses are sure about it. They know what they saw. But the explanation… That's the elusive thing. It's intriguing and befuddling and spiritual and all that. Passion, smoke, and divine rapture, sure, but it completely defies hard analysis. It's a cultural monster. It has captured the children. It constantly regroups, transforms, disappears under the water, and poof. We wait in terror for the next catastrophe. Yup. "The Dougie," You aint *&%$#@ wit it.

The monster's official emergence was April of last year. San Francisco Bay Area-hip-hop group Cali Swag District released their single "Teach Me How to Dougie." The song is amazing-- a masterpiece of minimalist complexity. The background beat is nothing but percussion. But the music does something to you. You know how in action movies, there's that point when doctor evil or whatever, is just about to destroy the entire world? You know, when he raises his finger in the air, and it dangles menacingly, as he readies it to push the big red laser button? That tension you feel, right at that moment? Well, that's kind of what this beat does—except the moment happens for nearly four minutes. Your body gets this message: "Hey, you should be doing something completely funky right now."

You don't know it yet, but that funky thing is "the Dougie."

Once you see "the Dougie," your Id goes: "That's it. That's why I feel all funny." But alas, you cannot "Dougie." Your scapulae and patellas confuse and betray you. You must be trained.

Either way, this Dougie thing is super dynamic. When someone does it the right way, it's like an optical illusion. The top part of the person's body is getting funky to the left. The bottom part is getting' funky to the right. Then they're coming and going, like a riot of knees, wrists, and shoulders. And it's real freaky, like if the Wacky Shack was a dance club instead of a haunted house.

See, something as fresh as "the Dougie," could only be American. It's so right, yet so wrong. So fresh, yet so ill.

Back in the '80s when hip-hop was new and real, there was a rapper named Doug E Fresh. He was known as "The Human Beat Box." In those days, musicians had to have some sort of talent before they became famous, and you didn't need a criminal record in order to get signed.

Back then, pretty much, all musicians danced while they performed. Doug E Fresh was no different. His thing was, rubbing his palm backward across his scalp while he danced. This meant he was "Fresh," which, back then, was urban slang, for cool, or stylish. (The rubbing motion signified grooming. And as we all know, grooming leads to Freshness.)

In the tradition of borrowing from previous eras, in the late '90s, urbanites started bringing back '80s trends. One of them was mimicking the smooth '80s grooming motion popularized by Doug E Fresh. Some kid in the Southern United States probably did it at a party and then other people started doing it.

By this point, hip-hop had become only the second purely American art form after jazz, and eventually received super-mainstream status. Like jazz, hip-hop spread across the country and the world, influencing lingo, fashion, and culture worldwide.

In the 2000s, hip-hop has started to branch-off and evolve, molded and influenced by region, the constantly-changing U.S. parent culture, and other factors. Hip-hop had manifested many different regional incarnations. First, it leapt across North America from its birthplace in New York to Los Angeles, where it became G-Funk. (Rapper Snoop Dogg is G-Funk's poster child. Producer Dr. Dre, is pretty much its mad scientist creator.) Then, hip-hop rolled through the South. Beginning near Memphis, it frolicked around a bit, eventually settling on a general headquarters in Atlanta. By this time, hip-hop's bassier, louder, more lyrically and musically simplistic Southern incarnation became known as Crunk. Producer Lil Jon and rapper Ludacris are some of this incarnation's well-known major players.

As the '80s resurgence became more of a blanket trend in the industry and the influences of certain minimalist music producers who had regressed to a simpler, yet streamlined and polished version of hip-hop production became prominent, Crunk gave way to Snap music. (A popular example of snap music and minimalist production style is "I Think They Like Me" (So-So Def Remix), by "Dem Franchize Boyz.")

The carefree culture of Snap music gave way to a looser version of "the Dougie," popular in Texas, called the "D-Town Boogie." (D is for Dallas, a large Texan city.)

Then, the Hyphy kids got a hold of it. The San Francisco Bay Area, and it's diverse, neon, retro, Punk-influenced, Hyphy (Hyperactive), carefree, goldrushing, politically-revolutionary culture, got wind of the D-Town Boogie and likened it to a crazy dance trend called Jerkin' ("Youre a Jerk" by the New Boys popularized it in nearby Los Angeles).

And there it was. Mysterious. Incomprehensible. Catchy. Exotic.

A souped-up, tricked-out, old-school, new-fangled, Crunked, Jerked, Sourthern-fried, West-Coast phenomenon, with East-Coast roots that you probably can't do 'cause you're not that cool.