The Erie Philharmonic Gets a Handel on the Holiday Season

by Tracy Geibel
View ProfileFacebookTwitterRSS Feed
December 5, 2018 at 11:30 AM 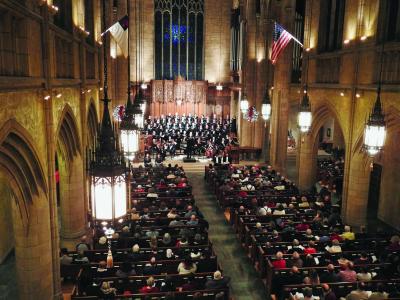 The Erie Philharmonic Chorus will spread Christmas cheer Saturday, Dec. 8 with its traditional show at the First Presbyterian Church of The Covenant on West Seventh Street.

The chorus will join musicians from the Erie Philharmonic and several guest soloists to perform George Frideric Handel's Messiah, an oratorio composed in 1741 that may not have been written for Christmas, but is now associated with the holiday season, even by casual listeners, thanks in no small part to its instantly recognizable "Hallelujah Chorus."

Baldwin has been called "ferociously talented" by the San Francisco Examiner and "mesmerizingly vulnerable" by the New York Times. Peitscher is known for her "rich sound and moving performances," and Edward Pleasant is considered "one of the most versatile performers of his generation."

Wesley Lawrence has appeared in shows across America and Europe. His accomplishments include performing as Rodolfo in Puccini's La Bohème in Italy and the solos in Dubois' Seven Last Words of Christ.

People are encouraged to purchase their tickets in advance, as seating is limited. — Tracy Geibel