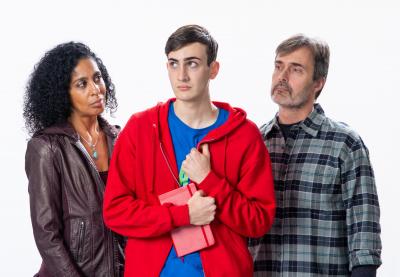 Rick Klein
Krista Lamb (left), Luke Bongiorno, and Ken Brundage star in the Erie Playhouse production of *The Curious Incident of the Dog in the Night-Time, a play highly regarded for its gripping mystery and thoughtful treatment of its autistic protagonist's condition.

The death of a beloved neighbor's dog is troubling to most, though especially so to Christopher. He's 15, highly intelligent, and dedicated to finding out what really happened to his local canine neighbor, who died under mysterious circumstances. To find answers, this young math whiz turns his attention from arithmetic to amateur detective work in The Curious Incident of the Dog in the Night-Time which will be on the mainstage of the Erie Playhouse throughout early November.

Comparing himself to Sherlock Holmes, Christopher (portrayed by recent Cathedral Prep graduate Luke Bongiorno) searches for the dog's murderer. His quest leads him to challenging confrontations, the most notable of which is with his father Ed (Ken Brundage). The audience soon learns that Christopher is on the autism spectrum. His condition is delved into as onlookers get to know the main character and follow him through his often challenging interactions with strangers and loved ones.

"Curious Incident is an incredible piece of theater that I've been drawn to since it debuted," said Kate Neubert-Lechner, "When we were constructing our season, 'Mystery, Mischief, & Mayhem,' this was one of the first pieces that came to mind," she continued.

"I love the style of onstage storytelling that the show supports. The show takes you inside Christopher's mind and reveals how he sees the world, so it relies very heavily on the actors, production team, and audiences to use their imagination and think outside of the box."

Some readers may be having deja vu, thinking they've read this spotlight before. They have, in summer 2018 when Erie's Dramashop did the same play, but according to Neubert-Lechner, that's part of the fun. She said that "The beauty of creating theater is that it's never the same way twice and that's especially true of this show. Every director approaches the same story in a different way and every actor finds different things in the same character, so even if the words and the story are the same, the show and sometimes the message or themes the audience sees are not the same."