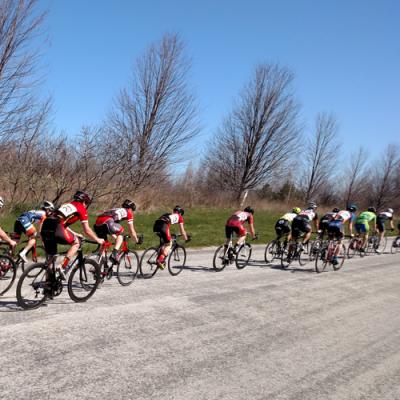 Cycling is one of the most accessible sports in the world: highly versatile and adaptable to serve an enormous range of purposes.

But for those with the need for speed, racing's allure is addictive. And riders can get their fix right here in Erie.

Three races remain in the 2016 Erie Spring Cycling Series. Last year, the series brought over 200 cyclists to the Erie area, including many from Buffalo, Cleveland, and Pittsburgh.

According to race organizer Ben Strunk, a spring racing series has been held here for at least 16 years. He said that the Presque Isle Cycling Club ran a spring series from 2000 to 2012, and the Erie Chautauqua Bicycle Coalition ran one from 2012 to 2014. Last year, Conglomerate Ltd. Road & Mountain Bike Team took over the work of organizing a spring series.

I recently connected with Strunk to find out a little more.

Katie Chriest: Can anyone local race?

Ben Strunk: The series is open to everyone above the age of five, but an annual USA Cycling license or one-day racing license is required. The races are permitted and insured by USA Cycling. A helmet and a bike with working brakes are also required. Newcomers to the sport are only allowed to enter races classified as Men's Category 5 or Women's Category 4: the first two races of each day.

BS: Anyone is allowed to come spectate and cheer on the racers as long as they don't interfere with the race. Normally the best spots for spectating are the start/finish line, on corners, and at the tops of hills.

KC: What sort of an impact does the series have?

BS: The main impact is that it allows for cyclists to freshen up their racing skills and fitness before heading to the larger races outside of the area later in the season. The series also allows for newcomers to enter the sport without being overwhelmed by the larger races; and racers are not pulled from the race if they are lapped, like they would be at a large race.

KC: What do you and your fellow Conglomerate Ltd. members hope the future of cycling in Erie might be?

BS: We hope that aggression between motor vehicles and cyclists will one day be gone. It has gotten better in recent years, especially with the 4-foot passing law; but there are still incidents when words are exchanged between parties.

BikeErie is the organization doing the major work for the future of cycling in Erie. They push for cycling safety, education, and infrastructure locally. They're making efforts to transform our streets and communities into healthy, vibrant, and accessible places for safe bicycling and active transportation for everyone.

The Erie Spring Cycling Series is sponsored by Five & 20 Brewing, Competitive Gear, and Lake Country Bike. Additional race series information, such as locations, entrance regulations, times, distances, and course maps, can be found on usacycling.org or at conglomerateltdcycling.com.