The first of many Sandusky victims settle with Penn State

by Jay Stevens
View ProfileFacebookTwitterGoogle+RSS Feed
August 25, 2013 at 11:08 AM 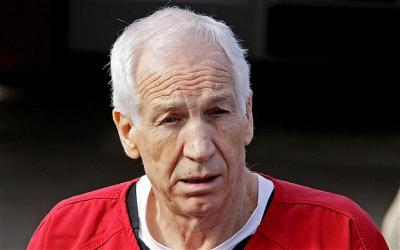 According to this USA Today report, Jerry Sandusky's adopted son and six others abused by the former Nittany Lion football coach settled with Penn State for an undisclosed sum.

Like all things having to do with the Sandusky scandal, this is just the beginning:

Nearly a week ago, a lawyer disclosed the first settlement among the 31 lawsuits filed against the school amid the Sandusky scandal. Earlier this week, a lawyer brought in by Penn State to facilitate negotiations said he expected 24 more cases to settle in the near future.

A Penn State spokesman on Friday said only that settlement talks continued to progress. He declined further comment.

Other lawyers involved in settlement talks said they were still working with the university but none had a signed, final agreement.

According to the report, the University spent $50 million already on the scandal, which doesn't include the $60 million fine levied on the school by the NCAA.

I wrote a cover story about the scandal and Jerry Sandusky's activities in Erie – he ran a football camp on the Behrend campus for at least six years after Penn State administrators and football head coach Joe Paterno learned Sandusky was engaging in sex with young boys on Penn State property. In it, I predicted the additional prosecutions, the civil suits. I'm no Nostradamus, of course; the fallout from the scandal was fairly obvious.

Now, months later, the edge and pain from the scandal has dulled somewhat. Joe Paterno is dead, of course, freed from the ignominy of possible prosecution and still a hero to many Pennsylvanians. Football continues.

In this light, then, it's important to remember that Sandusky happened because he was a football coach where football was regarded more highly than the well-being of a child. This is what I wrote then:

This is a football scandal, not a child abuse scandal.

Sandusky's actions were horrific and repulsive, but, taken alone, they brought shame and indignation to no one but himself. Barabara Ingribelli – mother of Behrend camper, Michael – put it best. "This man we stood next to," she said of Sandusky, "we were standing next to a monster."

No one thought of the boy.

What made this a scandal was that several men, when faced with a decision to either aid a small boy who had allegedly been raped by a 60-year-old man or to protect the reputation of a college football program, they chose football.

Have things changed all that much?