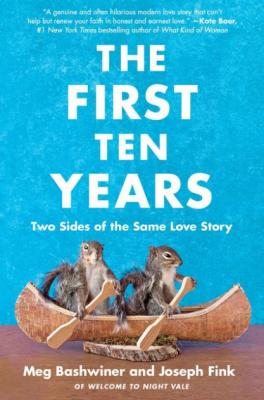 In 2009, Joseph Fink was a 22-year-old aspiring writer who moved cross-country from California to New York City to follow his dreams. Working odd jobs to pay the rent, he takes up volunteering with a theater company in the East Village for free tickets to their shows. Meg Bashwiner, also 22 years old, was an aspiring performer and playwright living in New Jersey with her parents, working a desk job during the day, and commuting to the city for her internship with a theater company in the East Village — the same one Fink was volunteering at. They met, became friends, and the rest, as they say, is history… Well, it isn't really that simple.

Hilarious and down-to-earth, The First Ten Years: Two Sides of the Same Love Story by Joseph Fink and Meg Bashwiner is as entertaining as it is heartwarming. The initial premise itself is enough to draw readers in: Fink and Bashwiner wrote their pieces separately, not consulting each other, leading to two different interpretations of the same events. Some are remembered vastly different from one another, while other events are nearly identical.

After the two met in 2009, Fink found huge success with Welcome to Night Vale, a podcast co-created with Jeffrey Cranor. Set in the fictional town of Night Vale, the podcast is presented as a radio show that reports on the strange events that take place in the town. Bashwiner is also involved, voicing a number of characters on the show.

While heartwarming and hilarious, the book also contains heartbreak and loss. The perfection of this memoir is truly in its imperfections, laid bare by authors who do not shy away from the more difficult subjects. Loss of a loved one, breakups, make-ups, and dark points in life are discussed and brought to the light, rather than hidden away and brushed under the rug.

Both Fink and Bashwiner have strong, unique voices that come alive on the page, having readers laugh along with them, but also grieve their losses and continue to root for them throughout the memoir. With the first ten years being this good, the next ten should be even better.