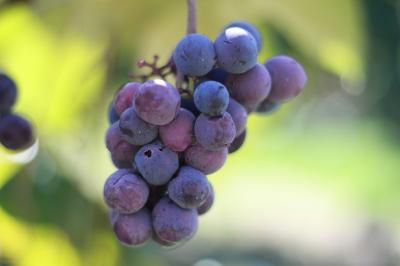 Jessica Hunter
Grape growing did not take off in North East until William Griffith and Samuel Hammond planted the first commercial vineyard there, specializing in the Catawba varietal. Their first winery failed, but the second, South Shore Winery, has been in operation since 1864.

The North East/Harborcreek region is known as Pa. Wine Country. Vineyards and wineries are to be found all along Route 5 and Route 20, and the area is home to one of the oldest wineries in Pennsylvania. But what you might not know is that this area owes a large part of its survival to grape juice. Not wines or jellies, but simple grape juice. And the story behind this is intriguing.

Until the American Revolution, most people grew just what they needed to survive, with a little left over for sale at the market or to towns. Fruit growing was an important part of the colonial garden because fruits could be made into "comfort drinks," i.e., wine, mead, and brandy. Early settlers were amazed at the variety of wild berries and wild grapes. However, winemaking with these grapes was not what they expected. For almost 200 years colonists' efforts in winemaking focused on trying to grow European grapes in America, and these varieties failed to thrive.

Peter Legeaux opened a vineyard in the Schuylkill Valley around 1784 which only grew grapes from France. In 1800, he wrote that it was the "Patriotic Duty" of Americans to ignore local grape varieties and continue to try growing European grapes. The only vines that grew well for Legeaux were Cape grapes, which were, in fact, native to the Western Hemisphere — they are believed to come from a hybrid plant crossed with a variety from the Schuylkill Valley.

Eventually, the winery went out of business. But even though Legeaux's winery failed, news of the Cape grape spread. Pennsylvania became the first state to plant Cape grapes on a commercial scale and became the birthplace of American wineries. Eventually, cultivation of the Alexander grape was replaced by the native Catawba grape, introduced by Pennsylvanian John Adlum, who also wrote the first book on grape growing.

Despite North East being Pa. Wine Country, it was actually a latecomer to planting grapes. The first places in Erie County known for grapes were Girard and Springfield. The first commercial vineyard was in Mooreheadville in 1843. Credit for North East's grape growing is given to William Griffith. Griffith was from Chautauqua County, where grapes had been grown for some time.

Griffith moved to North East in 1840, and he recognized that the soil and climate in North East were perfect for growing grapes. Aside from planting grapes, Griffith also helped build up North East as a town. He was one of the founders of the First National Bank of North East, part of the group which started the Erie & North East Railroad, opened in 1852, and a member of the board which established the Methodist Seminary in 1867. Griffith also encouraged other farmers to grow the Catawba grapes. He even convinced the United States Secretary of Agriculture to attend a meeting of local grape growers in October of 1865.

In 1850, Griffith and Samuel Hammond planted the first commercial vineyard in North East. They planted Catawba grapes as they were thought to be good not only for winemaking but also as table grapes. This first winery failed but after receiving outside funding they built a new winery in 1864 at the same location. The winery Griffith and Hammond started is the South Shore Wine Company, still in operation today. The winery sold its first batch of wine on November 21, 1867. The winery continued to grow, and more wineries opened in the following decades.

The owners of these wineries were aware of the growing temperance movement which began in the latter half of the 19th century. Most wineries had closed before the passing of Prohibition owing to the growing temperance movement in Pennsylvania. After Prohibition, the grape industry changed dramatically, and farmers needed to change or lose their farms. The Concord grape saved these family farms and the grape industry in North East.

The Concord comes to North East

Before the wineries, most grapes grown were table grapes, and even after wineries opened, many grapes were still grown to be sold locally. The most successful table grape variety was the Concord grape. In 1849 Ephraim Bull developed the "perfect" grape in Concord, Mass. This variety was not only sweet, but it was also hardier and matured much faster than existing varieties. Lincoln Fey, of Portland N.Y., is believed to be responsible for bringing Concord grapes to North East.

The Concord owes its national popularity to Horace Greely, editor of the New York Tribune and printer of the local Erie Herald. Greely offered a $1,000 premium for the best grapes in the county and proclaimed the Concord as the "grape for the millions." In the 1880s, the demand for grapes skyrocketed. Table grapes were the most commonly grown and by 1897, North East had become the largest producer and shipper of grapes in the world. Part of this is due to the farmers' associations which came to be known as "grape unions." The unions had specific rules about the growing, harvesting, and handling of grapes which ensured that retailers could be guaranteed a good product.

The advent of grape juice was to be the saving grace of grape growers in the area, and much of the credit is owed to Welch's. For a long time, it was impossible to make grape juice because the yeasts which covered the grapes led to fermentation. In 1869 Dr. Thomas Welch, a physician and dentist in New Jersey used Louis Pasteur's sterilization process on grape juice to be used for communion at his church. Dr. Welch was not interested in marketing his product. But his son, Dr. Charles Welch, thought that this could be big business. Charles devoted himself to grape juice, and in 1893 his juice was a hit at the Chicago World's Fair.

In North East, the Concord grapes grown as table grapes were perfect to use in making grape juice. There were a few men in North East who made grape juice, and Welch's first built their plant in Westfield, N.Y. in 1897.

Francis Walker Sr. owned 60 acres of vineyards in Harborcreek and his father-in-law, Chauncey Walker, owned a farm in North East. Francis Walker decided that what North East needed was a grape juice plant. He thought there was money to be made producing grape juice in Erie County, especially since the growers were right there. Walker bought 10 acres on the edge of North East along the Nickel Plate Railroad tracks in 1905 and in 1909 Walker built the largest and most modern grape processing plant in the world, far outstripping anything Welch's had. The plant was designed to receive one ton of grapes every 90 seconds. The equipment was so unique that Walker patented it. The company was called Walker's Grape Juice, and the plant was called by the locals simply Walker's.

While Francis Walker had experience in marketing and advertising, and his sons were passionate about the grape business, Walker did not have the large-scale sales network that Welch's had established and the company went bankrupt around 1911. Welch's purchased the North East Plant, but the plant was too modern for Welch's and so all of Walker's modern innovations were removed. It would be 1930 before Welch's started using bulk storage tanks, and in 1952, all the processing plants converted to bulk storage.

In the 1920s, California table grapes began to take control of the market. California growers could produce multiple varieties of grapes, not just Concords. The market for grape juice, and the fact that most growers already sold their grapes to fruit processors saved the North East area. Family farms had a market to sell their grapes and continue to make a profit, allowing them to stay in business.

Welch's is the only grape processor left in North East. The company is no longer owned by the Welch family and hasn't been since 1929 when it was sold to a group in Nashville, Tenn. In 1933 Jack Kaplan made the largest change in Welch's history. Kaplan started the National Grape Corporation in Brockton, N.Y. and soon had a large group of growers working with him. Kaplan sold his company to the growers with the stipulation that they form a cooperative to run it.

In 1946, they formed and named their group the National Grape Cooperative. In 1956 the cooperative finalized the purchase of Welch's and renamed it Welch Foods, Inc. This was the first time that a farmer's cooperative, run by the growers themselves, had purchased a multi-billion-dollar food industry. North East is still the largest supplier of grapes in both North East and Westfield, N.Y. And the North East plant is still the largest of its kind in the world.