The Future of Erie

Why I'm Running for Mayor 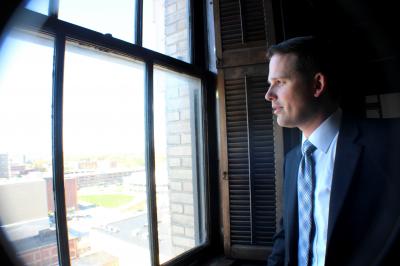 The next mayor is likely to hold office for twelve years, if history serves us correctly. That precedent makes this election one of the most important mayoral primary seasons in our city's political story. We've got a great comprehensive plan, and our city has great bones, for business, for industry, and for all of us.

When I walk my son to his class each morning at Jefferson Elementary, I see the rich diversity that surrounds him and I am grateful for the friendships he makes and the lessons he learns. I also see the promise of our public schools, yet I know we are far from realizing the potential they hold for the future of Erie.

In twelve years, my children will be nearing adulthood. My son, Elijah, will be entering his senior year of high school. I envision an Erie in which he rides his bicycle from his flourishing public high school to the downtown community college, where he will earn college credits at a fraction of the cost while still in high school. I envision an Erie where my wife, Jamie, and I meet him for dinner at the Brewerie at Union Station – by then nearing its 25th anniversary – before he boards a high speed train headed for Chicago or Boston with his championship robotics team, having developed skills that began on our living room floor with Legos and Lincoln Logs.

I also envision an Erie so safe that my daughter, Paige, – at 16 years old – will take EMTA with her friends to visit me for lunch at one of the many food trucks that sets up daily outside of City Hall, before walking to our prized waterfront, crossing the Bayfront Parkway by way of any one of our pedestrian walkways, separated from the vehicular traffic, to study at the Blasco Library.

By 2030, the neighborhoods that comprise our city will be home to second, third, and fourth generation New Americans who will have called Erie home and woven a new cultural fabric, not unlike the impact of the first wave of immigrants to find Pennsylvania's north shore so long ago.

Instead, we will know each other only as friends and neighbors.

By 2030, we'll make sure that there is no one for whom downtown is disconnected and distant. We'll make sure that the residents of Erie have access to our greatest amenities. We'll make sure that all of our children have generous experiences rooted in the pride of Erie. We'll do this so that no matter if they graduate from Erie's downtown community college or a prestigious university far from home, they will choose Erie to make their professional lives and raise families of their own.

These are simple thoughts, made actionable by little more than the leadership that our City so badly desires, but hadn't the will to exercise for the past twelve years. I'll empower people around me to make tough decisions about the way we do business, and I'll hold them accountable when they fail to do so.

In the military, I learned that success is not about one person, or one role, or one responsibility. Success comes from the totality of our actions. It comes from listening to and collaborating with the people who work for you as well as the people you work for.

As your next Mayor, I'll establish action teams in each of the seventeen planning districts outlined in Erie Refocused, our comprehensive plan. You'll decide what's best for your neighborhood and I'll make sure the work gets done. We can do this, together.

But first, Erie needs leadership in City Hall. I hope you agree that I've demonstrated leadership throughout my career in the military, the private sector, and my time on County Council. I hope you Vote Breneman for Mayor on May 16. I'm ready to lead Erie as your next Mayor.