The Future of Farming in the City 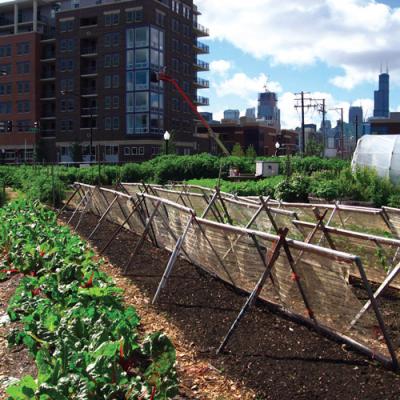 It was just over a year ago when I first approached the Erie Redevelopment Authority about the possibility of buying some vacant lots in the city for the purpose of urban farming. I stayed up late the night before, drafting a long list of things I hoped would persuade Scott Henry (the ERA's then-executive director) to let me farm in the city.

The list looked something like this: Increasing access to fresh food in the city will help to eliminate our food deserts. More generally, food produced and sold in the city will serve as a partial antidote to what many city residents consider an insufficient number of grocery stores. The vacant city land most likely to be repurposed for food production is currently in demand by no one, so putting that land to use will be great for both the city's tax rolls and those neighborhoods struggling with disinvestment.

The list went on, but my overly-impassioned plea was probably more than Scott Henry needed to hear. My reasoning made sense to him, but as head of the ERA I think he was less interested in the nuances of local food politics than he was with just getting some of the ERA-controlled land back into private hands. He agreed to look into current zoning regulations, and promised to get back to me.

Fast forward a year, and thanks especially to Scott Henry, City Councilman Dave Brennan, and City Zoning Officer Matthew Puz, the urban farming initiative has made considerable strides. While the necessary zoning changes have not yet been implemented, we're finally in the home stretch.

In the interest of transparency I'll admit that this initiative is a means to an end for me: I want to grow food commercially. Small-scale, specialty, intensive production, close to both my home and the city residents and businesses I plan to target as customers, is what I'm after. The political process that I've helped nudge along over the course of the last year is in some ways just hoop-jumping to clear the way for what I want to do.

But the initiative is also much larger than that. I wholeheartedly believe that a widespread urban farming/local food movement could be transformative for Erie. After all, for a manufacturing town that has historically taken great pride in local production, the extent to which we've outsourced our food supply is shocking.

As Rubye Jenkins-Husband pointed out at the recent mayoral candidates' forum at the Blasco Library, "We love food in this town." And we do. But we also need it. It's something for which – unlike Hammermill paper or GE trains – every single household, regardless of income level, has a line item in their budget.

By clearing the political way for commercial urban food production, City Hall would actually be clearing the way for a more autonomous local food system, and a more robust local economy as a whole. One in which the money we all spend on our daily bread, so to speak, has the potential to stay right here in the Erie market – supporting small businesses and the jobs they create. Does California really need or deserve our hard-earned dollars for their underripe tomatoes? Does the supposed convenience of California-grown produce really outweigh our need for local jobs?

I for one don't think so.

There are so many pieces to a strong local food system – it's much more than just eating our own tomatoes in August and September. Especially in a town as snowy as Erie, preserving local food, so that we can still eat locally come February, is critical.

And while things like the proposed food hub at the new EMTA facility, and true farmers' markets in locations throughout the city would go a long way in connecting producers and consumers, access issues will still abound. How, for example, can we incentivize the purchase of locally produced food for people on food stamps? How can we increase the public's understanding of not only the importance of sourcing food locally, but how to go about eating more seasonally?

But first things first: On May 3, at City Hall at 9:30 a.m., City Council is holding a public hearing on the proposed zoning changes, which would allow for commercial urban farming in certain, more-vacant parts of Erie. Those who can't attend the May 3rd hearing are encouraged to email expressions of their support to Erie City Council President Cas Kwitowski at ckwitowski@erie.pa.us, or call the City of Erie Clerk's office at 870.1291.

If we want to dig into the broader work of building a stronger local food economy, it is absolutely critical that supporters of this initiative make their voices heard.

Carrie Sachse is a local-foods advocate and aspiring urban farmer. She can be contacted at c.b.sachse@gmail.com.