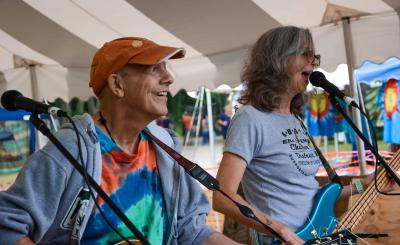 Steve Leitzinger
A longtime friend of the festival, Freddy Greco (left) passed away in February of 2018. In his honor, this year's new third stage will be named the 'Freddy Greco Stage.'

There comes a certain time of the year that reminds us locals that summer hasn't settled yet. At the end of July in the wooded backyard of one exceptionally rad family, a mass collective of kindred souls joins together annually to embark on a journey of immense jubilation. No, this isn't some twisted ritual to summon the gods, but simply the Gathering at Chaffee's in Girard.

This year will mark the 38th iteration of the musical festival, and every year has seemed to escalate in terms of fun. With live music, food vendors, souvenirs, and plenty of random shenanigans, the Chaffee's campgrounds will once again welcome everyone from near and far.

Emma Chaffee grew up around the festival, which her relatives simply called "the party," and now plays a key role in organizing it. On her family's extravaganza, she acknowledged that "after all is said and done, I end the festival 99 percent of the time with tears of joy from all of the good that people have brought and the music that has been played and enjoyed." She also states that the event is "one of the most important things in her life." Now if that doesn't persuade you to pack your tents and tie-dye shirts, then we should talk (I'm kidding). Out-of-town acts such as The Werks, Ekoostik Hookah, and Mosaic Foundation will blast festival-goers with musical delight from all around the country. And of course, hometown heroes such as Eric Brewer and Friends and Claire Stuczynski will deliver powerfully with their sonic charm. July 27th and 28th are two days this month that will provide stories to share long after the grounds have cleared. I'm excitedly looking forward to it all as always. Happy Chaffee's everyone! — Charles Brown

by Symoné Crockett4/16/2020, 5:10 PM
Symoné Crockett dives into the lovable and twisted mind of one of Erie's most memorable music educators