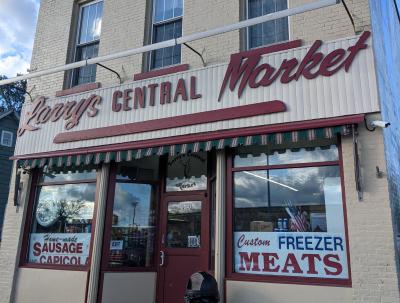 For Larry Adiutori Jr., owner of Larry's Central Market at 1626 Sassafras St., it's all about family. He's a third generation owner of the small grocery business, and his children and grandchildren frequently work alongside him. It's also about the family who came before them: the walls of the store are lined with old photos of life in the shop. And then there's the regulars, generations of loyal patrons who have become like family. The story of Larry's Central Market begins with the history of his own kin, the history of the turn-of-the-20th-century building which has been in the Adiutori family since 1963, and the history of the neighborhood that has changed dramatically over the years, where Larry's Central Market stands as an anchor, remaining largely unchanged throughout the decades.

The family history of Larry's Central Market starts with Lidano Adiutori, who came to America from Acuto, Italy near Rome in 1903 when he was 18 years old. His family settled in the Little Italy neighborhood of Erie (which is loosely defined as the area spanning Sassafras Street to Liberty between West 16th and 19th streets). Around 1930, after Lidano and his wife, Mary Estelle, settled down and had their children, he began his grocery business. The original storefront for L. Adiutori and Son was located at 1526 Chestnut St.

Lidano's son, Lawrence Adiutori (Larry Sr.), took up the family business and built upon it. In 1947, Larry Sr. married his wife, Mamie, and went into business for himself, operating his grocery and deli out of a stall at the Central Market House on 16th and State. The Central Market House was established in 1895 and was a sprawling open air market on the western side of State Street, just south of the railroad overpass. This market provided residents, restaurateurs, and grocers their supply of meat, produce, fruit, bread, fresh fish, etc. When Adiutori was able to, in 1959, he opened his own storefront just north of the Market House at 1412 State St. (this spot is now occupied by the elevators for the Kellar's Comedy Club building). Larry's Central Market was at this location for just four short years before they moved into the building that would be the family business for the next 58 years and counting.

The Commercial Italianate building that now houses Larry's Central Market was originally built around 1894 and has been a grocery store from its very beginning. Its original occupant was Adam Leib Grocery. Adam Leib was a first generation Erieite born of Jewish German immigrant parents. He opened the grocery store at 16th and Sassafras shortly after the building was constructed and was in business there until about 1922. After Leib retired, the building changed hands many times, but it always remained a grocery store. So when Larry Adiutori Sr. bought it in 1963, he wasn't just continuing his family's legacy, he was carrying on the building's legacy as well.

After Larry's Central Market moved to its permanent location, Adiutori's son, Larry Jr., started working in the store, shortly after he finished high school, and at 73 years old, he's still at it to this day. Adiutori reflects on his life in the grocery business: "I've never known anything different. It's what I liked, and it's what I knew and so that's what I just kept doing. It's a good living. A place like this builds character because you've got to work for everything you get and there's a personal satisfaction in doing the work." And Larry Jr. isn't the only Adiutori working in the shop these days; three of his five children work there, as well as his granddaughter. That's five generations of Adiutoris continuing a legacy started nearly a century ago. This kind of generational, small family business is rare these days, to say the least.

While I'm talking to Larry, there is a constant flow of people through the store. It is steadily busy on a Monday morning, filled with people from all different backgrounds who have made stopping at Larry's Central Market a part of their daily or weekly routine. And Larry greets them all with a smile, a handshake, or a question about their lives. It is that kind of personal connection that makes a small business like this so special and part of why it has continued on for so long. "If we ever closed the doors, you could never open this kind of store again," Adiutori explains. "It takes too long to build up the kind of loyal clientele we have here." At one point, Larry stops our conversation to greet a friend: a man named Guinto whose shopping bag contains fresh olives, sausage, and dried Lupini beans. Guinto came to Erie from Fiuggi, Italy when he was 21 and he shops at Larry's specifically for these specialty products, although he tells me that he actually comes just to see Larry's face.

While the physical store itself hasn't changed much over the decades, the neighborhood and, consequently, the products the market carries has. When Larry Sr. started out, the neighborhood was still recognizably "Little Italy," and he catered to this population by selling mostly specialty Italian products, homemade sausages and meats, and general groceries. But like any successful business, they have evolved along with the neighborhood.

When they first took up residence at 16th and Sassafras, the Central Mall across the street was in its heyday. That provided a lot of auxiliary business to Larry's simply from the amount of people coming into the neighborhood each day. Around 1988, when most of the shops in the Central Mall closed up, the area slowed down, and Adiutori saw an opportunity to adapt to the shifting demographic of the neighborhood. It was around this time that Larry's started carrying groceries requested by the growing Latinx population of Little Italy by stocking more Goya products, plantains, bulk rice, Sofrito, specialty coffees, spices, and cheeses. Today, you can see the beautiful variety of all the products the neighbors seek out along with the same specialty Italian products they've kept through the years including imported candy, homemade sausages, cured meats and capocollo.

The neighborhood of Little Italy now falls under the benevolent footprint of the Sisters of St. Joseph's Neighborhood Network. This organization was founded in 2000 by the Sisters of St. Joseph of Northwestern Pennsylvania, specifically to meet the needs of impoverished residents of Erie's Little Italy. Since then the network's reach has expanded to include the area of the city from East Avenue to Cranberry Street and from 12th to 26th Streets. The organization provides many services to the neighborhood including community gardens, soup kitchens, emergency assistance, affordable housing, public art projects, bike programs, tutoring, and mentoring (to name a few). Through their "Youth Work Experience" program, the Sisters of St. Joseph have worked with Larry's Central Market to allow neighborhood teens an opportunity to earn wages while gaining work experience and being mentored on the job. Larry tells me, "They've done a wonderful job of preserving the neighborhood. They've worked with us and sent us kids to work in the store. The young man they sent us most recently has been one of the best employees that we've had from them."

The Sisters have also been involved with the creation of a striking mural that adorns the north facing wall of the exterior of Larry's Central Market. Partially funded by the Adiutori family along with the Neighborhood Network's sponsors, the work was completed by artists Tom Ferraro and Ed Grout and is titled Trajan Market of Little Italy. According to the artist's website: "Four generations of the Adiutori family grace the north facing wall of this iconic Italian market located on the eastern edge of Erie's Little Italy Neighborhood. The mural celebrates the market's longevity in a neighborhood that once boasted over 25 small family owned markets."

One can't help but speculate what the future of this kind of family business looks like. But the fact that there are multiple Adiutori children and family members still involved with the market suggests it could go on for generations to come. Adiutori's daughter, Emily Czerpak, reflects on the family's dedication to the store: "Our kids will come in with us now and stock shelves. It's important that they come and know Papa's store. We're all together all the time and that's important. Some families nowadays don't see each other at all, and we get to see each other every day. If you have a problem, you have to work it out because it's not just a job, it's family and you have to step up."

While Adiutori never imagined the shop would go on as long as it has, and has never expected his children to be so involved, he's proud of what he's built and of being part of the fabric of the neighborhood for so long: "Success is measured in a whole lot of different ways. You just have to keep at it, regardless of whether it's glamorous or profitable. You just keep at it. It takes a lot of dedication to keep it going." Thankfully Adiutori, his children, and grandchildren feel the same sense of dedication and hopefully Larry's Central Market will carry on its legacy in Erie's Little Italy for generations to come.