The Goddamn Gallows Swing Back to Town

Brace yourselves, because Goddamn Gallows is coming back to Erie.

by Nick Warren
View ProfileTwitterInstagramRSS Feed
March 1, 2017 at 11:15 AM 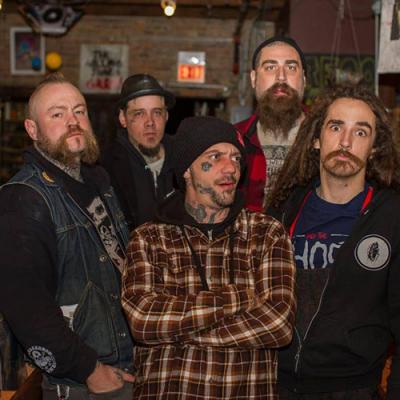 If you've ever seen the Goddamn Gallows live, you're probably excited to hear that they're coming back to Erie. The nomadic quintet were a well-known favorite at The Crooked i. The former State Street bar, once the epicenter for original music in Erie, closed its doors on March 30, 2014. The Goddamn Gallows were the final band to grace the stage that night.

Brace yourselves, because they're coming back.

Darcy's Pub and Grub will host the band's return, at "The Local" stage downstairs.

The band plays a unique blend of punk rock, bluegrass, and metal. Live performances by the Gallows are high-octane frenzy, wild parties fueled by the visceral energy the band exudes. Their shows are booze-soaked rampages. Literally. You might want to bring a towel, because things tend to get a tad rowdy. Shows prove to be endlessly fun, unforgettable experiences, winning over fans of every genre. The heavily tattooed band employs non-traditional instrumentation, complete with banjo, washboard, and accordion parts. The raucous flavor provides an almost surreal atmosphere, a haunted circus of hysteria at every turn.

Along with the Gallows will be a band with an some good name recognition. NP Presley & the Ghost of Jesse Garon is an eight-piece from Lexington, Kentucky with a rock and roll pedigree. Frontman NP Presley happens to be first cousin once removed to the king of rock and roll himself, Elvis (NP's mother, Paula Marie Helton, was Elvis' cousin, touring with him in the '70s). The rest of the band is named for Elvis' twin brother, Jesse Garon, who died at birth.

The band plays a classic, throwback style of rock and roll, also featuring the vocals of Heather Parrish.