Political hardballers pit stop in Erie on their way to the big show. 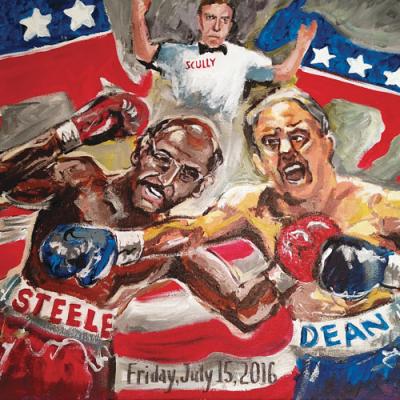 In most national election cycles, the nominating conventions are meaningless. By July, party stalwarts have long ago chosen the candidate who will represent them in November's general election and the parties' respective platforms are firmly rooted in party traditions – the past, not the future. But this year is different.

Both parties have been shaken by internal challenges to the establishment and establishment candidates. Neither party will emerge from 2016 unchanged.

Before the Republican National Convention kicks off in Cleveland, followed by the Democratic National Convention in Philadelphia a week later, two of the nation's most sought after political commentators and former officeholders are coming to Erie. As part of the Jefferson Educational Society's "Road to the White House," former Vermont Governor and one-time Democratic presidential candidate Howard Dean will debate Michael Steele, the former Lieutenant Governor of Maryland and a past chairman of the Republican National Committee. The debate will be held July 15 at 7:30 p.m. at Northwest Pennsylvania Collegiate Academy, and will be moderated by the most patient man on television, C-Span's Steve Scully.

Howard Dean and Michael Steele took time out of their debate prep schedules to speak with me about Hillary, Trump, and what major party politics will look like in the wake of 2016. What you're about to read is two phone calls compressed into one titillating conversation about the dark pursuit of the American Dream.

Jim Wertz: Let's get right to it, Michael. You've recently said that the Republican party needs to make its peace with Trump and stop talking about rule changes at the convention that would unseat him. Are you standing by that?

Michael Steele: Yep! Last I checked there's nobody else running against him, so he's the guy.

JW: What was it that got him here? He seems to be the most unlikely choice.

MS: He's the quintessential salesman. He knows his audience, the buyers of what he's selling. He knows what connects with them and he's been very effective at making his case. The establishment leaders on the political side have not been able to draft a strategy that exposes his flaws. It will be a different challenge for Trump in the general election, but it's a challenge that he's met before.

Howard Dean: I think what gives [Trump] a core base is that people who have been left behind by globalization are angry and afraid. It reflects on the business and political class that they have not done what they have to do, which is to make sure everyone gets included in the success of globalization. Trump is just the guy who came along and took advantage of this.

JW: Does none of his history matter? It seems like his business blunders and less than ethical processes continue to be exposed and no one seems to care.

HD: Lots of people care. He's behind significantly in the polls. His base doesn't care. The people who support Trump are not analyzing him in terms of rational economic policy. People who vote on anger and fear are not going to worry about whether somebody is telling the truth or what kind of a record he has. It has nothing to do with why Donald Trump is winning the Republican nomination.

MS: He may be all over the map on certain policies, he may be shaving the edges on certain concepts, but what people like about him is that he'll admit that. He doesn't run away from that. You've watched Mitt Romney and Marco Rubio get tied in knots trying to run away from past comments on Romneycare or immigration, but Trump modifies as he goes along, and in the course of that, he's bringing people along with him. It's not that he's being inauthentic. The authenticity is that he's not hiding behind a position. That makes it very challenging for people in a system that has come to expect and only knows a more conventional approach, and he's been anything but conventional since the very beginning.

JW: Nate Silver has publicly stated that based on his analysis Hillary Clinton has a 72 percent chance of victory over Trump. Is it too early to make these calls?

HD: It is too early. That's why Silver, who is the best in the business, puts the chance at 72 percent. It's not that high, it should be higher. But we're five months away from the election. Could Donald Trump win? Yes, he could. Anything can happen in politics.

"The polls mean absolutely nothing because no one has voted. Don't quote me statistics in July about somebody's chances to win the presidency in November. I appreciate what Nate Silver does, but let's talk in late October," says Michael Steele.

MS: The polls mean absolutely nothing because no one has voted. Don't quote me statistics in July about somebody's chances to win the presidency in November. I appreciate what Nate Silver does, but let's talk in late October. Hillary is still trying to get people to like her. She may lay down policy in the big speeches, but people still don't like her. Donald Trump is not vexed one way or the other if people like him. He's not trying to garner your favor. He figures in time that will come. Even if you're anti-Donald Trump, you're listening to what he says. He thinks, "Okay, now that I've got your attention, I'll introduce some policy," like he did recently on trade, which was antithetical to some traditional Republican views on trade.

JW: Is 2016 for the Republicans the catalyst for reorganization that 1968 was for the Democrats?

MS: This is a transitional convention for me, just as Donald Trump has been a transitional candidate. We don't know what to. I do not think we will have the same kind of appreciation and concepts around the presidential primary process, the party, and some of the constituent parts that go into that four years from now that we do today. Whether he wins or not this fall remains to be seen. But what we do know now is that the Republican party is different for his having run and he's exposed many of the fissures that some of us have been talking about for 15 or 20 years now. This is nothing new. These pains that we're experiencing now go back to Ronald Reagan's last year in office when our concern was "what will the party be like post-Reagan?" Now we're in the post-Reagan era and we've become a party that's strained and frayed at the edges, substantively, and along comes a candidate that fully exposes that.

JW: Does either party survive 2016 unscathed?

"Younger people in this country are economically more libertarian, but they are incredibly inclusive and so all the anti-immigrant, anti-gay rhetoric is going to keep them from voting for the Republican party," says Howard Dean.

HD: I think it depends what happens after the election. I think Republicans are going to have to change sooner or later and Trump may make them change sooner, especially if he loses. If he wins, it's going to be an enormous problem. We're going to have a very badly divided country. But if he loses, Republicans are going to have to do a reset and they have to do a reset to get millennials to vote for them. Younger people in this country are economically more libertarian, but they are incredibly inclusive and so all the anti-immigrant, anti-gay rhetoric is going to keep them from voting for the Republican party. The Republican party has to go back to basic economics to win over young people, who are now the biggest segment of the country. The Republican party knows that, but they can't figure out how to get off the deal they made in 1968 to bring all of the racist southern Democrats into the Republican party, Nixon's southern strategy. Now they're living with the consequences of that.

JW: Is Hillary Clinton pragmatic enough for the young voters that you're talking about?

HD: I think she is. I think she has long term vision and that matters enormously. I also think there are a lot of Republicans who are going to quietly pull the lever for Hillary. Michael Hayden, a very conservative former director of the CIA under George W. Bush, has said he can't support Trump. Hank Paulson's (former Secretary of the Treasury under G.W. Bush) already said he's going to support Hillary Clinton. These are people who really understand how the place works. And in the end, it's going to be a battle about competence.