A piece of family history is made 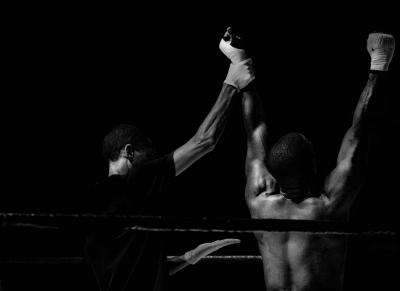 The beauty of Dad's storied history was all in the mystery. None of us could connect so much as a finger to any of it. The people, we never knew; the places, we'd never been. And, the experiences, well, nobody else could touch.

He talked often of his life as a young ward in the state of Massachusetts, living so briefly in the foster home of Mrs. Bracchi somewhere near Boston. While there, he'd be challenged to fight her big, redheaded sons. The winner would get a hot meal; the loser, a nickel – or, maybe it was the other way around. All Dad knew was, being the runt of a lost litter, he had to muster up some chops in short order.

And, this, apparently, led to some training in boxing.

He'd said he was, what, a welter weight? Only five foot three and a half, without shoes, he had to rely on quickness and agility, and we knew him to have these in abundance. Like a bird on a wire, his would be the very first head to turn at a sound or a sudden move in any room. And, when he'd raise his hand to anyone in defense, his tongue would curl under and get bitten down by his teeth. That's how we'd know he was serious.

As father to myself and two brothers, he'd listen to the fights on the radio or watch them on the Tv in his barbershop. After Mum died, he'd view them alone, at the house, until well past his 90th birthday. And, while he enjoyed every fight he could find, his all time favorite, the best boxer he'd ever seen, was Cassius Clay. By the time the rest of the world caught on, they called him Muhammad Ali.

Dad, having the charm of a whole cast of clowns all wrapped up in one wiry little body, was captivated by Ali. He loved the quickness, and the moves, and reveled in the sassy, self confident challenge that always burst from Ali's belly as soon as the mouth guard found its way out. He'd hoot with joy every time the man said anything.

But, Dad's time stopping moment would come heading south on Ash Street, right before dusk, driving the Catalina home from just another day at the shop making long hair short. Always sharp of eye, he'd noticed a figure emerging from a parked car and looked twice, recognizing both the head and the cut. There, standing on the sidewalk right across from the Polish Falcons, was Muhammad Ali himself.

Ali had been brought in, for a charity event, perhaps to speak at the Sportsmen's Club or be the special guest at an athletic awards ceremony. Those in attendance select VIP, the rest of our small city would gain its collective satisfaction just knowing the Great One was in town.

But, not Dad. He swerved the car to the curb, jumped out, scrambled for his wallet, selected a tiny, faded scrap of paper, fumbled into his pocket protector for a pen and, unabashedly, bounded right toward his hero.

I don't remember what was said. Neither, as time passed, would Dad. He'd only known that Ali was gracious and kind, and signed his autograph to that little scrap of paper. What I do remember was the moment when Dad tore through the back door, rushing the kitchen in exclaiming triumph: " You'll NEVAH believe it! I cayun't hahdly, myself! LOOK! Look what I have, hea-uh!" He was trembling.

After Dad died, his little zippered pouch that carried only his precious things remained in the drawer in my bedroom. In it, he'd kept a handful of silver dollars, a couple rings, and his flat, smooth tan leather wallet. I haven't looked in that wallet, but I'd bet a shave and a haircut that Muhammad Ali's autograph is still there. After all, the Greatest, they know their own.