The Hills Come Alive at the Warner Theater 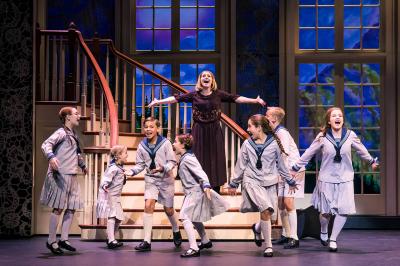 A new production of The Sound of Music will stop at Erie's Warner Theatre while touring across North America.

Set in 1930s Austria, this version of the quintessential musical tells the story of a nun, Maria Rainer, who accepts a job as a governess for a family of seven children — Liesl, Friedrich, Louisa, Kurt, Brigitta, Marta, and Gretl. She quickly becomes attached to the family and even finds herself falling for their widowed father, Captain Georg von Trapp.

And, as most film and musical fans know, trouble arises when Captain von Trapp is drafted to join the German Navy, which would force him to fight against Austria. To avoid this, he makes plans to flee with Rainer and the children.

Captain von Trapp is played by Mike McLean, who has previously partaken in national tours as Benny in Guys and Dolls and Frank Jr. in Saturday Night Fever. Rainer is played by Lancaster, Pa. native Jill-Christine Wiley, who is also familiar with national tours. She has acted as an understudy for Belle in Disney's Beauty and The Beast, a role she also played at a regional level.

"Even if you've seen The Sound of Music before, it's worth going again to see it this way," wrote Nancy Churnin in the Dallas Morning News.

This version of the musical runs about 2 hours and 40 minutes long, including intermission. It's recommended for audiences age six and older. — Tracy Geibel