The Hold Steady show off more of a bar-rock swagger.

by Alex Bieler
View ProfileFacebookTwitterInstagramGoogle+RSS Feed
April 2, 2014 at 7:17 AM 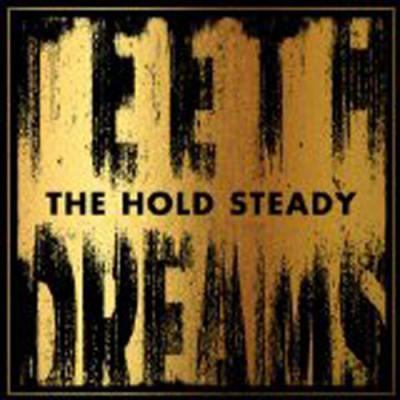 Teeth Dreams, The Hold Steady's sixth album, finds frontman Craig Finn actually singing. While it's pretty much expected that vocalists, you know, sing on albums, fans of the bar-rock band know that Finn typically adopts a more speak-singing style, rapidly spitting out lines involving the usual topics of hipster losers, ideology, and redemption over Bruce Springsteen-inspired guitar hooks. Finn doesn't always ditch his trademark lyric poetry – see: "On With the Business" – but the proud Minnesotan does test his pipes on a fair number of tracks, such as the vulnerable "Almost Everything." The Hold Steady also shows off more of a bar-rock swagger with the addition of second guitarist Steve Selvidge, helping to make final track "Oaks" burn brightly across its nine glorious, slow-burning minutes. The band's latest album doesn't stray too far from the anthemic slacker gospel it made its name on, but you can certainly sink your teeth into Teeth Dreams and come away sated. — Alex Bieler