The "Innocence" of Youth: Jojo Rabbit is Too Twee for Its Own Good

Taika Waititi's new film could be viewed in two ways 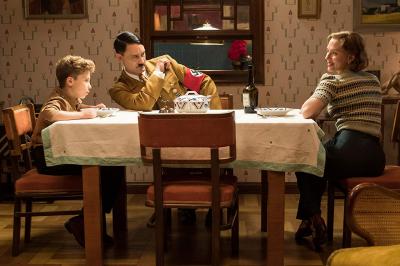 Theodor Adorno famously said that "to write poetry after Auschwitz is barbaric." This is ironic given how many filmmakers have used the subject to move audiences to tears and often win copious awards. But so often these films resort to cheap sentimentality rather than truly attempting to grasp the scope of the horror of life under Nazi-occupied Europe (closer to Roberto Benigni than Claude Lanzmann). Taika Waititi's (What We Do in the Shadows, Thor: Ragnarok) new film Jojo Rabbit is just such a film. Dubbed an "anti-hate satire" by its director, it's so bright and often cutesy that the satire becomes harder to swallow.

The story follows Johannes (Roman Griffin Davis), a lonely German boy who fully believes and supports the ideology of his country as espoused by his imaginary friend, Adolf Hitler (Waititi). However, when he learns that his mother (Scarlett Johansson) has been hiding a young Jewish girl (Thomasin McKenzie) in their house, Johannes's blind nationalism is put to the test.

The film could be viewed in two ways: on the one hand, it works as a story of a young mind reaching maturity under the shadow of totalitarianism. But as a satire, it falls flat due to Waititi's style of storybook, sub-Wes Anderson gloss, made worse by the laughably bad German accents. As a result, any truths about living in Nazi Germany feel artificial (aside from one heartbreaking scene) and worst of all, he runs the risk of turning history's greatest monsters into Saturday morning cartoon villains. And that is no laughing matter. — Forest Taylor