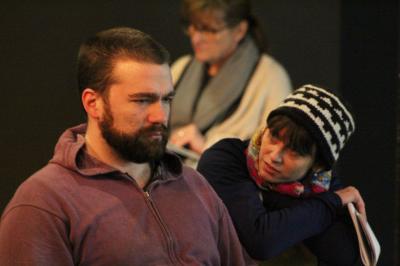 The tale of Judas Iscariot is perhaps the world's best-known story of betrayal. According to Dante Alighieri, he was condemned to be chewed in one of the three mouths of Satan in the Ninth Circle of Hell for all eternity.

It's quite the sentence to be served, but does Iscariot deserve his true day in court?

For three weekends, the Performing Arts Collective Alliance (PACA) will give Judas that trial.

In a production featuring a cast of 18, The Last Days of Judas Iscariot will be directed by JR Fabin and Margo Wolfe. It's a production close to Fabin's heart. Years ago, the local actor saw a friend in England posting about a production he was involved in. "I eventually bought a copy of the script and was completely enamored by it," Fabin explained. Later, he brought up the play to PACA executive director Mark Tanenbaum. A few months later, Fabin found himself heading up the production along with Wolfe.

"For people who've never heard of it: Yes, this play is based on a historically religious event. Let that be where it ends," wagered Fabin. "This is a courtroom dramedy where someone combined the Passion Play with Law and Order, and then asked Quentin Tarantino to rewrite it."

The play, written by Stephen Adly Guirgis, debuted in 2005, its original run directed by the late Philip Seymour Hoffman. "People are going to go from holding back tears within the first five minutes to belly laughing, to gasping, to even feeling a sucker punch here and there," explained Fabin. "It's definitely an emotional roller coaster."

Featuring a cast that's a virtual who's who of the Erie theatre community, several actors will be playing multiple roles (like Mother Teresa, Sigmund Freud, and Satan for example), over the course of the play's two acts, often breaking the fourth wall and interacting with the audience. Through their experience and their instincts, they add layers to the production that might not have been there with an inexperienced cast" Wolfe noted. "We are fortunate to have this level of talent in Erie." Fabin detailed that "you really don't know what you're going to get from scene to scene. It's not a cut and dry courtroom play," Fabin argued. "You'll also experience flashbacks and reminiscences that occur amidst the trial, all intertwined between the testimony of witnesses." — Nick Warren

by Nick Warren9 hours ago
A Q&A with the iconic author, New Yorker, and cultural jukebox prior to Oct. 6 MIAC date