The Last Hurrahs at Bobby's

Venue that always opened its doors finds them closing 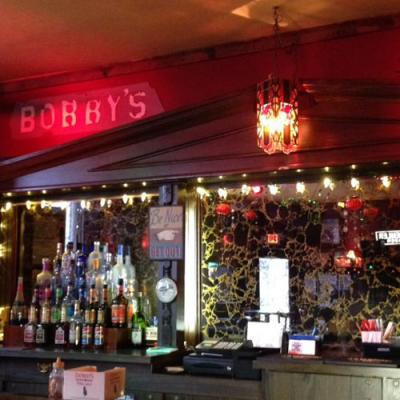 "You can't put your arms around a memory." That warning encapsulates the bittersweet feelings many local music fans have about this weekend. The lyrics are courtesy of former New York Dolls guitarist Johnny Thunders, emblazoned on flyers for the final show at Bobby's Place.

For a few years now, Bobby's Place has been the most welcoming place for original music in Erie. After the demise of the crooked i followed by the closing of the Beer Mug, several establishments were left to fill in the gaps left in Erie's live music community. While the resurrected King's Rook Club became a permanent home to the rock and jam scene, and Basement Transmissions continued to foster young talent of all genres, Bobby's was a place for the misfits. Musicians that packed in crowds at places like Scully's or Sherlock's in the mid-2000s began migrating to a quaint smoky club at the corner of two dead-end streets.

Though the barroom of Bobby's may be cozy, new guests would consistently marvel at the spacious outdoor stage. With a fully covered roof, two bocce courts lead the way up to the stage. It's a hidden gem, and one that will find its ideology continued, albeit in a different way.

The owner of Bobby's, Elena Marasco has plans for the future. After happily parting ways with the venue's liquor license, Marasco, a self-confessed "picker," plans to reinvent the location as an eclectic vintage shop, hosting flea markets in the roomy outdoor space. "The spirit of the facility will still be alive, it will just be taking another direction, and I know it's one that's familiar to the musicians," Marasco explained. "I've talked to them about their pickin' habits," she laughed, referencing events like Dave Steele's Punk Rock Flea Markets and Matt Texter's record swaps.

The stage will remain in place, and Marasco hinted that it most likely wouldn't be the end of music at Bobby's Place, just of late-night shows fueled by alcoholic beverages. "I feel like I'll still have a connection with everyone, because I'm going to run with a format that's engaging to this same community," she reasoned.

Local songwriter Matt Texter helped oversee the venue's swell of live music, which ramped up around three years ago. Hosting open-mics and vinyl nights, Texter pointed out that "for me, it became my neighborhood haunt." He fondly likened it to one of Bobbys' most-loved faces, who passed away in March of this year, explaining that "Like Bill Disantis used to say, it's my Cheers bar." Texter went on to note that "Elena opened her doors to all genres and people. It's one of the last, local, DIY venues and when it's gone, there will be a hole left in the scene. I'm going to miss it," he lamented. "I get nervous when these roots wither. What happens to the fruit?"

Promoter Alex Harilla described the venue as "a place truly open to all music regardless of genre, that gave underground bands a home in Erie." He acknowledged that "that openness isn't easy to find and will be incredibly missed."

The last weekend will see two big shows, with six bands on Friday, and seven bands on Saturday. Both days will feature the crossover thrash group, Maniacal Device, fronted by "Morbid" Rob Burke. "We're going to miss Bobby's Place," an uncharacteristically sentimental Burke admitted. "Maniacal Device thought of it like home. Elena and company always treated us like rock stars."

Along with Maniacal Device on Friday will be Mala Sangre, Black Moon Mistress, Planet Claire, the Crooked Cobras, and Nightjar. Carlos Rivera, singer of Mala Sangre, proudly noted that "Bobby's provided me an outlet for my original music. Elena never censored us, and provided a pleasant atmosphere for us to play our music." Rivera confessed that he was "totally saddened by this closure, like I was when the Beer Mug closed."

The final night will feature Hard Luck Story, Detroit Red, Paint 31, Kevin Pollifrone, The Wild Eyes, and Genetically Enhanced Super Humans (GESH). Set to play the last set of the last night, David DeFranco, bassist for Hard Luck Story, noted that "I'm incredibly sad to see Bobby's go. I've made some friends, and played some of the best sets of my life there. I'm honored to be part of its send-off, and hope that we will do it justice."

Providing a home to local music is something essential to a thriving culture. While it remains to be seen who the heir apparent will be for punk rock and other edgy genres, we can still look back on our times at Bobby's with a smile. — Nick Warren