The Legacy of Books Galore 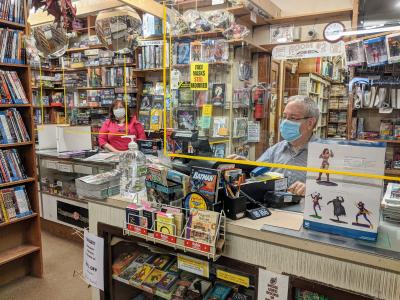 These days, when you take a trip to upper Peach Street, it can be hard to imagine how this area of our town looked 100 years ago. Passing by car dealerships, chain restaurants, and massive superstores, it feels impossible that this area was once farmland and wilderness, with horses and buggies trudging through unpaved, sparsely populated dirt roads. There is, however, one surviving relic from those simpler times. Sandwiched between the corporate sprawl of the Millcreek Mall and the expanding reach of LECOM developments, sits the unassuming old storefront of Books Galore (five-time Best of Erie Winner for Best Comics and Collectibles Shop and Best Independent Bookstore). Books Galore sells used books, comic books, and games and has been a part of the fabric of upper Peach Street for nearly 40 years, although the building has been there much longer. Built in 1920 by the pioneering spirit of one family, its survival is due to the legacy of the few families that have worked to make it what it is today.

The history of this area is inextricably tied to the Biebel family. Daniel and Charlotte Biebel immigrated to Erie County from Germany in the 1830s. Daniel originally worked as a bricklayer and was described as "hale and hearty," as he would prove to be when he eventually purchased large amounts of acreage in the Kearsarge area, started a timbering business, and built log cabins on site to live in while working. Their son, George Biebel, and his wife, Mary, began the first commercial business on what is today upper Peach Street: a hotel and tavern called the Walnut Creek Hotel on the spot that is now the corner of Biebel Avenue and Peach Street. At that time, the area had a smattering of residents and the land where the Millcreek Mall now sits was farmland, as far as the eye could see. This tavern would have been a popular way station and watering hole for travelers coming into the city from further south in the county or state. They achieved great success, and it is upon that success that Mary and George's two sons, William and Edward, began multiple business ventures and eventually built the storefront at 5546 Peach St. in 1920 to be a general store for the area that was becoming more populated as the century wore on.

As far as I can tell, the Biebel family, their descendants, and their extended family owned the building up until the 1970s. It started by selling general wares, as described in Nelson's Biographical Dictionary and Reference Book of Erie County, PA: "He (Biebel) has enjoyed the liberal patronage which he seeks to deserve by carrying all the merchandise embraced in a general store: groceries, provisions, flour, feed, fertilizers, boots and shoes, glassware, farming tools, hats, caps and notions." The store remained a general and grocery store until it was sold outside the Biebel family in the early 1970s. During this time, the business changed pretty regularly and enjoyed time as a photography studio, a dance studio, and multiple retail ventures until 1983 when it was purchased by Duane Wallin and converted into his vision and dream: a used book store and comic book store, which it remains to this day.

Wallin was a voracious reader. He read any chance he could, loved books, and collected many over the years. Rather than retire in the traditional sense, Wallin decided to spend his golden years realizing a dream of his: to turn his passion into his work, and start a used bookstore. When the storefront at 5546 Peach St. went up for auction, Duane, his wife Mary Ann, and his son Jim toured the building and knew immediately that this was the place. The building looked and felt like it was meant to be a bookstore, and the family spent the next couple of years turning Duane's dream into a reality. Duane was the dreamer, Mary Ann the realist, and Jim was the muscle, hauling books all around town and building the bookshelves that are still in use today.

The building has remained largely unchanged since it was built in 1920. The Wallins were charmed by the woodwork and have kept it all intact over the years, including the original floors, trim, windows, doors and hardware, pocket doors, and glass doorknobs set in Art Deco style plate sets. As you make your way up the creaky wooden staircase, the second floor is the stuff of used bookstore dreams: books are piled up in every nook and cranny, closet, and alcove. This area of the store used to be rental apartments and still has a vintage bathroom (with unmodified sink, tub, and tile) and original kitchen cabinets in a back storage area. This level of preservation is unique in a retail setting in general, but most certainly unique for the upper Peach Street area, where nearly every building is either new or has been modernized over the years. And while this antiquation gives the bookstore its character, it also provides its share of frustrations, as most old buildings do. But issues such as lack of storage space, accessibility, and close quarters are offset by the historic charm of the building.

Wallin started the business when the Millcreek Mall was being developed, and upper Peach Street and the Kearsarge area slowly started to morph into the bustling commercial district we know today. It was at this time that the Wallin Family and Books Galore became linked to the Phillips family (which also happens to be my family). When I first met my husband, he was working at Books Galore along with his brother Doug, his mother Marge, and his Aunt Carol. Most people who have shopped at Books Galore over the years think of this family as the personality of the store. Jim Wallin (who took over ownership of Books Galore, as well as his other property, the King's Rook Club, when his father, Duane, passed in 2001) reflects, "It really wouldn't have come together like it has or gone on as long as it has without the Phillips family." Marge and Doug Phillips both worked at the bookstore from around 1985 and stayed up until Marge's retirement in 2018. That's 33 years of dedication within one family to a retail business. Another long time employee, Bob Dobiesz, who has worked at the bookstore since 1990, points out "the dedication and length of the employees' stay here is pretty unique." And their dedication to the business has inspired those employees running the store now to stay on and do their best to help this small business succeed. Current manager Cole Schenley reflects: "When I was a kid, I came here. I started shopping here when I was like 10 years old. This place means so much to me. Marge, Carol, Bob, everyone was always really kind to me all the years I shopped here. And then when I got this job, I felt this responsibility to keep it going, mainly for them."

It is not just the employees who keep coming back year after year; most of the customers of Books Galore are regulars and make visiting the shop a ritual of sorts. Comic books are serialized and new issues come out weekly or monthly, so most comic book customers are used to coming into the store every week to pick up their newly issued comics. Then those repeat customers bring their children with them who start up a weekly habit of buying comics, and so on and so on. "Legacy is a good word for it. I've seen kids come in and then they bring the next generation and then even their grandkids. People who came in here when they were kids and have since moved out of town always come in to visit when they're back in Erie," reflects Dobiesz.

It is this legacy, this feeling of familiarity, comfort, and ritual that has contributed to this tiny bookstore's ability to survive the encroachment of big-box retailers, online sales juggernauts, as well as the pandemic. One can't help but worry about a small business and its ability to survive in the economic and public health crisis we're currently in, but Wallin feels confident: "I'll put it to you straight, I think that the bookstore will be fine. We have to weather the current pandemic storm, but our people are committed enough to jump in and fight for the bookstore. And our customers are so loyal, this place gives them a sense of comfort and a place to belong. It's an important part of their upbringing, it's their hobby and their life. It's going to be here as long as everybody who loves it wants it to be here and supports it." The legacy of the century-old shop on Peach Street, the legacy of the Biebel, Wallin, and Phillips families, and the legacy of multiple generations of customers will hopefully continue on for many more years to come.