"The Mayor" comes to Erie 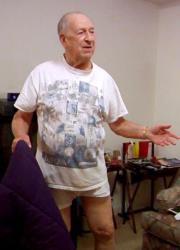 Sam Berger has no problem admitting he likes chasing tail.  The near-constant smirk he wears may even suggest he's even a bit proud that he's girlfriend is 28 years his junior.

But let's be clear. Cordy, Sam's girlfriend, isn't naïve or lacking in worldly experience or maturity. She's is 60.

Which means the simpering, cocksure "mayor" of a Dallas-area senior retirement living community is 88.

Directed by Jared Scheib, "The Mayor" focuses on the characters living in the community with Sam at the center. The seniors gossip, laugh, bicker, and find ways to embrace the vivacity of life in their twilight years, drawing audiences in in an earnest and refreshing way.

"I like to think that when I'm interviewing, editing, filming that I'm being as objective as possible," Scheib says of his filmmaking when it comes to this documentary. "I consider my duty to let the characters speak for themselves and let they tell their own story.  So I try not to get in the way of them being themselves so that the truth can come out on its own."

At slightly over an hour, the film doesn't rush through the narrative of Sam and Cordy's relationship, and it captures the others without shortchanging their relevance. Yet, a large chunk of film fell to the ax in the editing process to capture such conciseness in storytelling.

"For me, editing is a scientific process – and I don't think anyone may think that when they watch the film – but basically it's kind of a scientific-emotional process where I'm looking at the footage and editing material that isn't critical to the story or doesn't move me in someway, and so it's similar to a sculpture where you start with an entire slab of stone and slowly chip away to reveal the piece that's within it," says the 26-year-old filmmaker. "I just tried to remain open to what moved me the most to distill an hour of footage to a five-minute scene that captured the essence of the emotional impact."

What results is a pleasant and enjoyable film about honest and emotionally-open characters who welcome you into their lives to show you that life is more about measuring the moments rather than the minutes. And that's something we can all learn from.

Ben Speggen can be contacted at bSpeggen@ErieReader.com, and can be followed on Twitter at @ERbspeggen.

"The Mayor" makes its east-coast debut Wednesday, Nov. 14. FILM will screen the movie at 8 p.m. at the Erie Art Museum. Doors open at 7 p.m.