The Metal Schtick of Psychostick 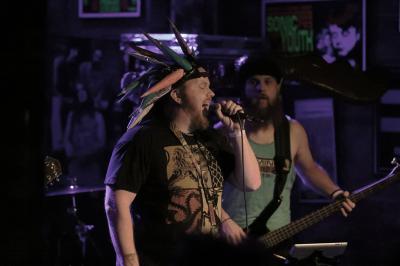 Metal is a genre that may be guilty of taking itself too seriously at times. Psychostick laughs in the face of that assumption. Since the turn of the century, Psychostick has been combining comedy and metal into one knee-slapping and ear-ringing experience, with songs about beer, beards, pop culture, and satirical jabs at metal itself (if any readers under 20 want to know what the early Internet was like, check out the video for the song "Beer!" for a full explanation). Any Psychostick performance is like seeing Weird Al and Pantera at the same time, and they're bringing their two-in-one routine to Erie on the ironically-named Serious Business Tour.

Opening acts for the evening include Urizen, another band with a sense of humor on tour from Texas, and local metalheads Primal Scream Therapy, Bravura, and Gelatin Skeleton.

So come out to Basement Transmissions and see if you can laugh and headbang at the same time. — Tommy Shannon