Leave it to the writer who made a hugely popular play out of a bad haircut to follow up with another deceptively mundane premise. 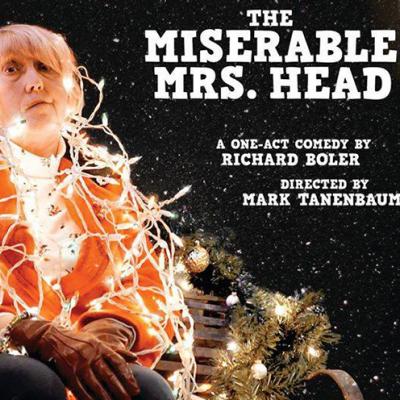 Three women wait for a delayed bus on Christmas Eve.

Leave it to the writer who made a hugely popular play out of a bad haircut to follow up with another deceptively mundane premise.

Playwright Richard Boler's last effort, The Bad Haircut, was hailed by Ben Speggen as "An intellect's delight … grappling with the notion of humanity's disconnectedness through religion, philosophy, psychology, medicine, materialism, and spiritualism while using comedy as the vehicle to drive through the myriad challenges and issues we face in contemporary culture."

Boler says his new one-act comedy, The Miserable Mrs. Head, addresses a similar subject. "But I wanted to do more of a heartfelt take instead of an intellectual take," he explains.

To Boler, humor is a "celebration of human fallibility – the key word is celebration. It's not biting satire which makes people feel less of themselves."

To Boler, humor is a "celebration of human fallibility – the key word is celebration. It's not biting satire which makes people feel less of themselves."

The play is directed by Mark Tanenbaum, with Cheryl Horton-Jong, Camille Jones, Betsy Butoryak, and John Stockhausen. It takes place on Christmas Eve, because Boler "creatively always felt deeply connected to Christmas," and "felt that there was something melancholy and romantic about Christmas Eve."

Though this is not a musical, like Haircut, Mrs. Head contains original music by Boler, who describes himself as "kind of an idiot savant when it comes to songwriting, with the accent on 'idiot.'

"Music touches something deeply human in us," he reasons, "and if the songs can do that in the context of the play, that's the whole point. The two songs in the play are not incidental. They are the emotional heart of the play; the point at which the three actresses feel sad together and feel their humanity together.

Boler surmises that "We live in this kind of sneakily dehumanized age. People are feeling stressed and distracted and overwhelmed and busy. We have progressed our way into an existence that we haven't been able to adjust to. To be sad about that is to be human."

And so, we watch three women wait for a bus and see ourselves. And as he did with Haircut, Boler hopes that through that connection, "people won't feel so lonely anymore."

"These three are women who are for various reasons trying to find their way to sadness," Boler says. "That's the first step to healing."

And laughter is, of course, the best medicine. – Katie Chriest