The Myth and Matters of Erie's First 'Strong' Mayor 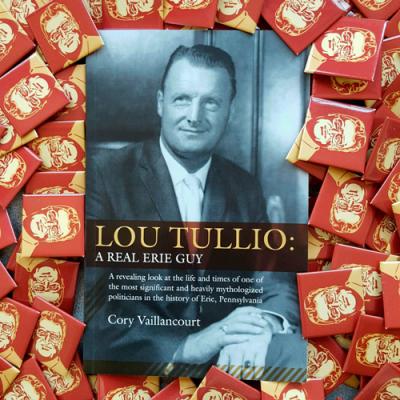 You don't need to spend much time in Erie before you're confronted with Lou Tullio. Not the man himself, of course, but his enduring legacy. Remnants of his success abound, from the recently renovated Erie Insurance Arena that previously bore his name to the annual "Celebrate Erie" festival, which he founded as "We Love Erie Days" to distract Erieites from the fact that their city had forgotten to celebrate the nation's bicentennial in 1976. His failures, like the Transitway Mall on State Street, have all but been erased. As we remember him 25 years after his death, there are still politicos in this town who owe their positions to his patronage, for better and for worse.

Tullio's story is a great American tale. The son of immigrants, he attended the College of the Holy Cross in Worchester, Mass. on an athletic scholarship, started a family there, and went to war on behalf of his parent's adopted nation. He returned to his beloved Erie in 1947 and embarked on a lifelong path to power.

Part of that mythology are the oft-speculated improprieties – ranging from financial misdeeds to mafia connections – which Vaillancourt says are unprovable and most likely untrue, based on the research he conducted for what amounts to an accessible and, at times, heartwarming portrait of Erie's first "strong" mayor.

Tullio was the first mayor who wasn't a member of Erie's city council. That body controlled Erie by virtue of the councilmanic form of government in which five council members – one of which was the mayor – each oversaw one of five city departments. Tullio came to power because of the untimely death of his political rival, Michael Cannavino. The people's choice in the Democratic primary of 1965, Cannavino died just days before the general election, leaving the party to call on Tullio to lead the city's new political structure … for the next 23 years.

During that time, Tullio amassed his share of opposition. The business community fought him on the Transitway Mall, a covered two lane section of State Street intended to offset the loss of downtown business to what is now the Millcreek Mall. City councilmen like Pat Cappabianca, Bob Brabender, and Bernard Harkins, all Democrats, teachers, and Catholics from Erie's 6th Ward, fought Tullio on the sale of the water department, among other initiatives. And let us not forget the political witch hunt that led to an IRS audit of Tullio's finances.

What stands out from Vaillancourt's narrative are the striking similarities in Erie's contemporary political landscape. Innovative ideas are often traded for tradition and safety. Democrats from Erie's 6th Ward continue to reign supreme in council chambers, holding the keys to success or trump cards of failure for the person who sits on the fifth floor of City Hall. And cross-party rivalries become matters of the court when a "strong" mayor flexes his muscle.

Vaillancourt artfully details these stories and more in this comprehensive analysis of the Tullio era and its place in the annals of Erie history. But precisely because this work examines the man, place, and time in an empirical way rather than within the aforementioned mythologies of Lou Tullio, readers will likely view the book through the lens of their preconceived notions about Tullio and his unmatched tenure as mayor.

No doubt, the mythos of Lou Tullio is greater than his 8,713 days in office. More enduring than the accomplishments of his administration is the mythology of the man and his modus operandi. His time in office was marked most prominently by the bridges built between the mayor's office and council chambers. He didn't begin his political career as the man people wanted, but he became the mayor most of Erie didn't want to live without. As the city approaches its next mayoral election, that is a story worth reading.