The New Generation of Basement Transmissions

The beast opened its mouth and the city headed in and Liss Vickery was there to report. Erie, welcome to the new Basement Transmissions. 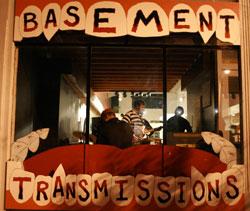 So, we arrived in the belly of the beast, staring out its jaws, gawking at its insides, listening to the rumble of digestion from its guts? and dancing.

Seven bands, three artists, and scores of people partied in the bowels of the underground on September 9 and 10. Our scene?s newest art gallery and all ages venue opened its mouth to the welcoming necks of the public.

And they?re both thirsty for more.

?My favorite part of the show was the way the age categories integrated,? said co-founder Bob Jensen. ?There were so many of the old-timey Basement crew hanging out with these young kids who are the new Basement Transmissions crew.?

And after the success of Unearthing the Underground, their first fundraising event, Basement Transmissions will continue broadcasting from their new home at 1501 State St. They?re gearing up for more gallery showings, live music, art classes, even a place to find albums from your favorite local bands. Not to mention a haven for the under-21 crowd, because, in this city, apparently you have to drink in order to see good music.

Through a pair of teeth framing the front windows the very first band to ever take the BTR stage Friday night played to a crowd deprived of their sweet, indie-lolipop sound. After months of absence from the circuit, Planet Claire delivered.

Switching up, Susan, Be Anthony! Melted our faces with their gritty, yet melodic, post-apocalyptic sound. Still in high school, they play record-label tight.

And polishing off the night with Johnny James And The Absolutes, left us with a cocktail of sounds sending our heads spinning. Their brand of rock feels dirty in the existential way a shot of fine whiskey goes down smooth while still burning your palate.

?We kind of want a little bit of everything to show there?s other cool music out there,? Walker said.

With the PA pounding into the atmosphere, a gallery of twisted wonders awaited the wandering show-goer. ?Eerie? Eric Fargiorgio, Ken Johnson, and Justin Blair took over the walls with canvas, paints, pastes, and pure emotion. Friday night also presented the addition of Amy Gaughn with some art in action involving body paint and an airbrush.

The biomechanical renderings of Johnson appeared to come from the darker recesses of a dimension far outside our own. Interspersed with this underworld, Fargiorgio?s pin-ups and Sasquatch sightings leant a splash of color and curiosity. Oil on canvas never looked so sexy. Well, excluding Bigfoot.

And the circuitry of Blair?s work brought it all together. From twisting, turning tubes of paint to collages with copyright laws, his pieces exuded electricity.

On Saturday, Jensen and co-founder Jordan Walker were in a mad scramble to get day two started. And, for the sake of journalistic integrity, I?ll let Michael Bennett talk about the opening act.

The following act, Graveyard Gorefest, put on a set of covers, leaving me disappointed. However, the lead singer, Jon Peterson, a.k.a. Calypso Columbine, climbed speakers and growled into the mic like a being possessed.

From there, Squid Vicious took the helm, turning the tides toward a more laid-back, contemporary indie feel and engaging the audience in their banter and playful antics.

The last band to take the stage after a weekend of illumination played a set to make you shimmy. The Couchriders, masked and armed with a funky groove, took no prisoners. But bassist and artist behind the BTR sign, Nate Gilles, should not be allowed to have a microphone.

?Everybody?s welcome who?s trying to be there,? said Jensen. ?The point of it is to give anybody who is trying to do something a chance.?

By January, BTR hopes to begin art classes and have their artists booked for the entirety of 2012. So, if you?re interested, you better roll down there with your portfolio and have a chat with the couple. Or, if you?re a total shut-in, email your work to basementtrans@gmail.com.

Musically speaking, shows featuring hip hop, dub step, industrial, and punk are already in the works. And Gimp Guy Underground will be taking over the BTR complex September 17 and 24 with such bands as Festering Pestilence, Obelus, and The Hannigans.

But trust me, the moment you walk in the door, you will be devoured.

Liss Vickery was honored to take the stage with her band, Manslaughter Mourning. Look it up on the FB. Like it. You know you want to. Or, email Liss to complain about her excessive use of power chords at lissvickery@yahoo.com.