The Next Shift: The Fall of Industry and the Rise of Health Care in Rust Belt America

A deep dive into deindustrialization in Pittsburgh 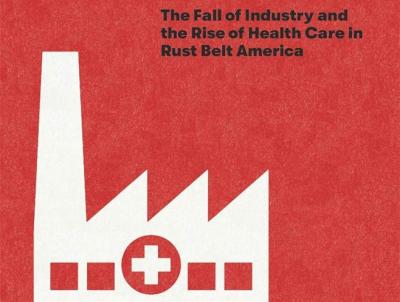 n the wake of the 2016 election, as national reporters parachuted into Western Pa. to explain the Trump phenomenon, cliches about the "Rust Belt" abounded. For a week or so, our abandoned factories and struggling small businesses took center stage in the media. Some of this reporting was at least partially accurate — our region has certainly been ravaged by manufacturing decline, for example — but a lot of it was dangerously superficial as well.

One important factor that's often edited out of this discourse is the decisive role of healthcare in our local economy. In 2020, the largest non-government employer in Erie County wasn't Erie Insurance; it was UPMC. Over 23 percent of our workforce in Erie County is devoted to healthcare and social assistance, a rate nearly 7 percent higher than the manufacturing sector. What if someone were to account for our economy more honestly, examining the ways that service labor and healthcare have supplemented (or even replaced) our traditional manufacturing base?

University of Chicago labor historian Gabriel Winant traveled about two hours south to tell this very story. The Next Shift: The Fall of Industry and the Rise of Health Care in Rust Belt America is a deep-dive into Pittsburgh's evolving economy since the 1950s. Winant begins with an unsentimental assessment of the steel factories that led to mid-century prosperity and ends by raising crucial questions about the relationship between healthcare, industry, and labor rights in the present.

Structurally, the book balances engrossing firsthand accounts from workers with occasionally dense economic data. You'll learn what it was like to witness life-threatening injuries on the floor of a mid-century steel mill, and you'll emerge with a nuanced sense of the relationship between union power, deindustrialization, medical innovation, and health care access over a seven-decade period.

Unlike many accounts of seemingly-macho factory labor, Winant doesn't limit his analysis to the experiences of men. Instead, there's a chapter devoted to the "working class home," in which a factory worker's wife details how difficult it was to keep kids quiet while her husband slept after his night shift. More broadly, the book explores how difficult, dangerous factory work often led to psychological trauma, alcoholism, and domestic abuse in the home. Later, Winant connects the poor health of these workers to their impact on the healthcare system as they aged. The same people inhaling toxic dust in steel mills in the '60s were often frequent hospital visitors by the '90s, creating employment opportunities for their treatment while increasing the cost of Medicare.

The Next Shift is also careful to acknowledge the experiences of African Americans, who were forced into the most dangerous (and least lucrative) positions on the factory floor during the industrial heyday — and laid off from those positions at disproportionate rates. As factories began closing in the '70s and '80s, African American women began working as care workers, in low-paid positions lacking benefits or long-term security. Winant demonstrates the structural nature of discrimination very effectively, pairing his data with firsthand testimonials about the insecurity and exhaustion that came along with this labor.

The Next Shift isn't exactly a beach read. But it's a rewarding one for anyone interested in local labor history - and unsatisfied with shallow assessments of the "Rust Belt." — Dan Schank