The Politics of Loving Thy Neighbor

A local Little Free Pantry, and the importance of mutual aid in Erie 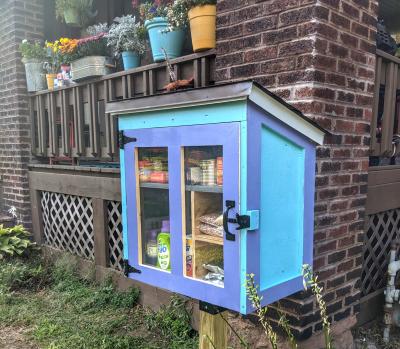 In November of 2018, Raegin Irwin and her son, Lyrik, took a donated record holder and created a free food pantry in front of their house near 8th and Liberty in Erie. This project was directly inspired by seeing a similar food pantry in Pittsburgh, which had been vandalized. Raegin and her son talked about the Pittsburgh pantry that was smashed to pieces and decided they wanted to make a pantry of their own. Lyrik even offered to put the money he would receive for his upcoming birthday towards the first haul of donations. After putting some feelers out on Facebook, through the help of donations from friends and family, and an old record holder with a tarp hot-glued to it, their Little Free Pantry came to be.

Raegin and her son's pantry are part of a larger mini pantry movement whose website states it is "a grassroots, crowdsourced solution to immediate and local need." Raegin's pantry is just that. Run entirely on donations, this pantry is made possible by neighbors who want to lend a helping hand. A few months after they created their pantry, it was stolen—taken right from their front yard. Raegin created a GoFundMe to gather donations to build a new one and they received enough donations not only to create a more sturdy pantry to replace the stolen one, but also enough to stock the new pantry with items for a month. The message of their project is stated on a little sign below the bright blue door: "Take what you need. Leave what you can."

Donations for Raegin's pantry aren't always regular. She said that frequently she comes home and sees items in the Little Free Pantry that weren't there before. "Sometimes someone will pack it and other times it's just an item or two that people were able to donate," Irwin said. "I have received checks in the mail and I have received payments through Facebook, both of which are great to me." Raegin also mentions that she budgets money from each paycheck to buy items for the pantry. Several months after she created her Little Free Pantry, she made a Facebook group for the project and discovered other similar pantries in the area, including one which Girl Scout Troop 36165 started before her own. When she has a lot of donations, she visits the other pantries in the area to drop off items there.

In the Facebook group, Erie residents share which pantry needs donations, stories about the pantries, and tips on how to make these pantries as helpful for as many people as possible. Some people have shared that they started leaving food and other goods in Little Free Library boxes around town as well. Raegin's Little Free Pantry on 8th and Liberty and other similar pantries around Erie offer a very clear example of local mutual aid.

What is mutual aid? In short, it's the simple act of being a good neighbor.

A longer definition would be "when people get together to meet each other's basic survival needs with a shared understanding that the systems we live under are not going to meet our needs and we can do it together," according to Big Door Brigade, a website started by transgender activist Dean Spade. Spade also writes that mutual aid projects like Raegin's Little Free Pantry are "political participation in which people take responsibility for caring for one another and changing political conditions, not just through symbolic acts or putting pressure on their representatives in government, but by actually building new social relations that are more survivable."

In fact, the free food pantry that inspired Raegin and her son was created by Pittsburgh's branch of Democratic Socialists of America (DSA). The pantry was a project started by Pittsburgh DSA members in the Socialist Feminist Committee of the branch, and the project began their Ecosocialist Committee. The committee members view "food justice as being intimately tied to larger ecological concerns." Raegin herself attributes the creation of the pantry to her beliefs and politics. "I fully believe in a fair and raised minimum wage, equal rights, universal healthcare…..all things that I believe are just morally right, but are very politically influenced," Irwin explained. "I don't think that anyone, no matter who you are or where you work or whatever your personal situation is, deserves to live in poverty."

Instead of shying away from seeing the Little Free Pantry efforts as political, what if we leaned into it? What would it mean to see that politics isn't just partisan mess and tweets from Capitol Hill, but also supporting neighbors who might scrape to get by? As America's favorite neighbor, Fred Rogers, once put it: "We live in a world in which we need to share responsibility. It's easy to say 'It's not my child, not my community, not my world, not my problem.' Then there are those who see the need and respond. I consider those people my heroes."

Reagin shared with me a story of a neighbor who had left a letter in front of her door right before last Christmas. The letter was from a woman who had been using the Little Free Library for her family because they had fallen on hard times. She was able to get food for her family through the pantry, which was especially helpful as her kids were on winter break from school. The Little Free Pantry had been stocked with children's toys, which according to the letter, allowed this woman to have some toys for her children for Christmas. Reagin said that card still means the world to her, and is the epitome of why she started the pantry.  In this way, the pantry is doing the work of neighborly love by sharing responsibility, like Mister Rogers said. We ought to be proud of looking out for our neighbors. Now more than ever, this is not the time to be turning our heads away and sticking our noses up.

It is a privilege to claim to be apolitical. But perhaps there's another issue within that: how often are we aware that what we're doing is political? It's easy to point to voting, protesting, and debates on TV as political in nature, but it's not as simple as that. The relationship between one's personal experiences and the larger political structures in our city, state, and country is far too complexly connected to be ignored. The strain COVID-19 has put on people of various socioeconomic status has made the reality of that relationship—the one between the personal and the political—very apparent. Raegin says the reason she is a huge proponent for helping the little guy is because she is the little guy. Irwin stated, "I have luckily never had to wonder where my next meal will come from, but my heart breaks for anyone that is food insecure because I could easily be put in that situation on any given day as I'm one of the millions of people that live paycheck to paycheck."

The need for the Little Free Pantry is unique for each neighbor who uses the resources inside it, but overwhelmingly falls back on a deficiency of resources. The solution that these free pantries offer is mutual aid. The beauty in all of this is seeing an empty makeshift pantry one day and seeing it overflowing with pasta, toothbrushes, and secondhand children's toys the next day. And the shock? The shock for some is that this good deed and the helping hands behind it is, in fact, political.

The Little Free Pantry directly challenges the image of politics as being the corruption and chaos that makes us turn off the news. This small community project is offering free resources to neighbors and expects nothing in return to those who use them. In 2020, when COVID-19 puts everyone's lives and livelihoods at risk, doesn't that sound radical?

Want to create a free pantry in your neighborhood or donate to an existing free pantry? Contact Raegin at raeginirwin@gmail.com, check out the Facebook page The Little Free Pantry - Erie.