The Prescient Kingdom of Charles III 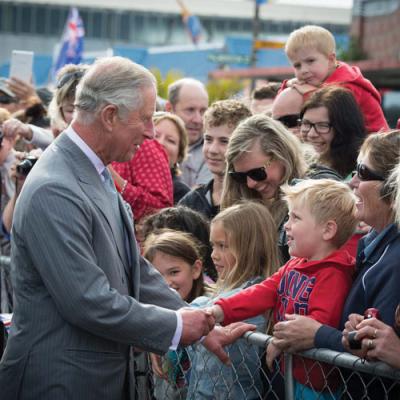 England's royal family has been an ever-present source of fascination in the U.S. cultural landscape. Despite the fact that most Americans can name several key members of the House of Windsor, the title King Charles III might take a minute to sink in. Mike Bartlett's play, which debuted overseas in 2014, envisions an alternate timeline for British monarchy. The story follows Charles, Prince of Wales, who at 68 is the longest-serving heir apparent in the entire history of the British Empire. The play sees him ascend to the throne after the death of his mother, Queen Elizabeth II, becoming the titular Charles III, played by Joe Haas.

Using the tools and traditions of old, Bartlett crafts a contemporary, engaging storyline. Freedom of the press is held in balance, with modern technology placing things at a key turning point.

The play is written in blank verse, an unrhyming form that employs iambic pentameter (10 syllables per line), a longstanding feature of English poetry. Using the tools and traditions of old, Bartlett crafts a contemporary, engaging storyline. Freedom of the press is held in balance, with modern technology placing things at a key turning point. The real-life Prince Charles has had a long, conflicted relationship with news outlets, who played a major part in his 1996 divorce from Princess Diana, as well as her death a year later. The play weaves together the lives of current royal family members, including William, Duke of Cambridge (Nicholas Emmanuele), Kate Middleton (Emily Olszewki), Prince Harry (Matthew Crays), and Camilla Parker Bowles (Betsy Butoryak).

Dramashop director Michael Haas described the play in his own words, saying that "it says a lot about privacy, about the role of tradition in our lives and what happens when we pull back the curtain on those things we hold as 'established' and begin to question 'why.' But more than that, it's about family."

The family connection is one that rings true in this particular production, as Haas-the-younger finds himself directing his father, Joe. Michael considers it a pleasure, joking that "it's been really rewarding and fun. It's funny when you notice acting habits that turn out to be genetic." But is this Brit-centric script for Anglophiles alone? Haas says absolutely not. With plenty to take away for the average American theatergoer, the director hopes audiences will see "the ever-changing dynamic of familiar relationships. Whether you're a family in Erie or the British royal family, the problems are the same." – Nick Warren