The Promised Land Right Next to Brooklyn 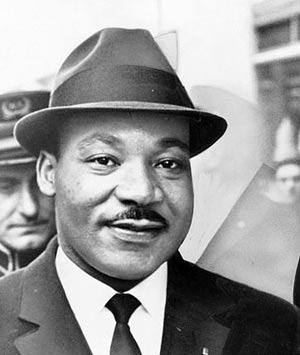 It's rich in warmth for me. Probably because of how it has been presented through my life.

I usually didn't want to get up early on a day I didn't have school. And it was January. Erie Januaries are cold.

But by the time my brain woke up, as the marching juiced my circulation, I was usually buzzing on the unity vibe. The annual MLK march carried with it, an air of excitement. I was taking a stroll with hundreds of people united for a common purpose. It made my heart happy.

And well, then, there were the doughnuts. Tables and tables of free doughnuts for all the marchers. That made my tummy happy. And the cocoa made it warm.

Dr. King's string on the web of the collective conscious, is inextricably tied to many others--others that often strike chords of pain, guilt, tragedy, and unresolved bitterness.

That's strange to me. The way I see it, fear benifits from narrowed perspectives far too often. This is no different.

If I were standing at the beginning of time, with the possibility of taking a kind of general and panoramic view of the whole of human history up to now, and the Almighty said to me, "Martin Luther King, which age would you like to live in?"

Dr. King said he'd check out Ancient Rome, Greece, and places in early and contemporary America. He said he'd swing through early Egypt, and watch Moses crack open the Red Sea. But in the end, King said, he'd not rather be any place but where he was. The United States. During the turbulent, conflict-laden 60s. And he continued:

Now that's a strange statement to make, because the world is all messed up. The nation is sick. Trouble is in the land; confusion all around. That's a strange statement. But I know, somehow, that only when it is dark enough can you see the stars. And I see God working in this period of the twentieth century in a way that men, in some strange way, are responding.

King's trek through history is important, because, I think it showed that King didn't see the Civil Rights movement as just a black-white thing. He saw past basic emotion and primal fear. King saw through to the core of the struggle. His expansive vision, in the grand scheme, saw that the 60s was just a drop in the pan.

He saw that the issue was injustice.

He saw Moses leading against Egypt's unjust actions against the biblical Israelites.

He saw Franklin Delano Roosevelt leading against poverty and corrupt market forces that caused fear and fervor during the Great depression.

But I imagine that all warriors against injustice travel to different mountaintops, to see different Promised Lands. Leaders have to go there when the mainstream does not yet agree. They must see and describe Promised Lands that don't yet exist. And before thier radical visions of injustice have gone mainstream and entered common practice, they must weather the opposition of the unjust and unenlightened.

In an atmosphere rife with danger, King asked that this be done with dignity:

We don't have to argue with anybody. We don't have to curse and go around acting bad with our words. We don't need any bricks and bottles. We don't need any Molotov cocktails. We just need to go around to these stores, and to these massive industries in our country, and say, "God sent us by here, to say to you that you're not treating his children right. And we've come by here to ask you to make the first item on your agenda fair treatment, where God's children are concerned. Now, if you are not prepared to do that, we do have an agenda that we must follow.

The Martin Luther King holiday isn't about that time somebody cursed at you in the fourth-grade, or that kid that punched you on eighth street when you were 11. It isn't about politics, or the President, or why you don't like gangs or rap music, or--free donuts, for that matter.

The Martin Luther King Holiday is about the fact that, as long as the world spins, somebody somewhere, will take advantage. They'll see an opening. They'll mislead the public, and somehow, somewhere along the way a huge imbalance will occur. A spiritual deficit. And most folks will be too afraid to stand up and admit that what is happening is wrong.

And then, they will come. The mountaintop seer. The Promised Lander. The leader who has the courage to push his vision for that silly notion called justice.

When it's too far to grasp for many.

When it isn't a mainstream holiday.

When it's a straight-up threat to the status quo.

That guy. That spark. That vision.

That's what the holiday is about.