The Quiet Force of Emma Lawrence 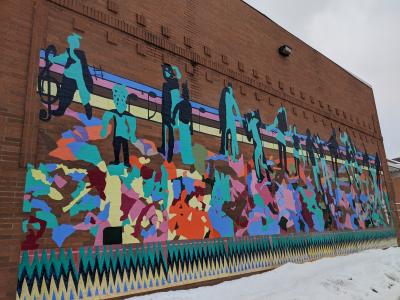 In the preface to Sarah Thompson's Journey from Jerusalem — one of the few books to be written about Black history in Erie — she begins: "The history of the City of Erie begins in 1795. The history of African Americans in Erie begins at the same time, but, in the unfortunate tradition of US history, standard accounts of the past two hundred years present a one-sided picture which does not adequately represent their presence or contributions."

As I began researching the life of Emma Gertrude Lawrence — Erie's first Black female business owner, founder and operator of Lawrence Dyeing and Cleaning for 50 years, and matriarch of a legendary Erie family — I felt these words before I read them. Soon after beginning the pursuit of Emma's ancestry, I was struck by the white privilege that is genealogical information in America. In order to research the life of this woman, a woman of color, born pre-Civil War to a Black mother and a Native American father, I would have to consult other resources.

Local historian and long-time friend of the Lawrence family, Johnny Johnson, who became my main source in this research, commented on this lack of perspective as well. In a presentation he gave in 2019, he stated: "Erie was incorporated as a city in 1851, yet no comprehensive study was done on Erie African American History until 1994. Only four books have been written about African American history in Erie. That's a 145 year void in documenting the presence of African Americans in Erie." However, in 2020, Johnson himself, along with historians Melinda Meyer and Chris Magoc, completed another document to add to the small pile of literature on Erie's Black history by publishing the project A Shared Heritage: A Timeline of the African American Experience in Erie County. This project is one of the most comprehensive studies ever done on Black history in Erie and it was there that I was initially inspired by the story of Emma Gertrude Lawrence.

Emma was born in 1858 in Ohio. There is little recorded of Emma's early history, but it appears that her father was a Native American named Stephen Toles (also seen spelled Toiles, Tolles, or Tolls) and her mother was of African descent, but her name and information beyond that has disappeared from record. Emma was orphaned at an early age and wound up in a foster home in Buffalo, N.Y. She ended up fleeing what must have been a dire situation and found refuge with some relations in Erie, who eventually adopted her.

It was in Erie that she met her husband, John A. Lawrence. John was employed as a waiter at the Reed House Hotel, which was a prominent hotel in Erie, situated at the corner of North Park Row and French Street. According to census information from 1880, prior to his marriage to Emma, John was living at a boarding house on Seventh Street, owned and operated by Laura Sterrett. This is a very interesting Erie connection: Laura Sterrett was married to Joseph R. Sterrett, whose parents were among the earliest non-indigenous settlers of Erie. Aside from Laura's daughters and parents, other residents totaled 16 and among them were various boarders, servants, and nurses. John was the only person of color living in the house.

In 1881, John and Emma were married. They had their first child, Earl Lawrence, in 1881 and by then the family had moved to the area of the city that would become their kingdom: the northwest corner of West Third and Chestnut. John continued to work as a waiter while they lived there. They had two more children, a daughter Effie and a son, Charles. Shortly after Charles' birth in 1884, John Lawrence died suddenly and young, at just 28 years old, leaving 25-year-old Emma, a young mother with three small children, alone. A few years after John died, Emma came to care for a fourth child, Earnest (he went by Ray, his middle name). Earnest Ray was born in 1889 in Buffalo, N.Y., and Johnson suspects, although it is unverified, that Emma may have adopted him from a family member, as she had relatives in Buffalo.

Emma called upon the strength that got her through her difficult youth and began taking in laundry to make money to support her family without her husband. Their home at Third and Chestnut was converted into a laundry business and Emma gained respect as her business expanded. She found investors to back her enterprise and eventually it grew into a dry cleaning and dyeing plant by the turn of the century. At this point, the family had a separate residence across the street from the plant. By the time her children were adults, the business had at least five other employees, making up a diverse workforce: Black and white, male and female. Emma ran the business and oversaw its operations up until a few years before her death from heart failure in 1934 at the age of 76. Her son, Charles, continued the family business, keeping it running until the mid-1960s.

It can be difficult to get a sense of the personality of someone who has been gone for nearly 100 years, but through a few recorded stories, I get the sense that Emma had a love for the arts. In the book Erie History - The Women's Story, the authors note: "She had a special talent for working with color, and to her fell the tasks of the dye process. After work when she was resting from the day, she would sometimes look at the sky and remark, 'I dyed a dress that color today.'" Johnson recalls that she was also very proficient at needlework.

Two of her children went on to become artists, which suggests that they were supported and encouraged by Emma to pursue their talents. Her son, Earl, was an adept and multi-talented musician who owned his own studio on State Street and taught music in multiple Erie County schools. Her son, Ray, was a natural piano player and performer before his untimely death at age 36. Johnson describes Emma as being "a proponent of hard work and education." Emma's granddaughter, Ada (who was an Erie legend herself, being the first Black teacher in the Erie School District), recalled "delightful visits to the plant at Third and Chestnut. The barrels of salt made an interesting play area, though Emma always set limits. She had a quiet force that demanded respect." These few glimpses of the personality of Emma Lawrence gives the impression of a gentle but firm, creative, quietly confident woman who made her family's education a priority and did so by working hard and earning the respect of anyone who met her.

The places a person lived in and worked can tell you a lot about them. Their habits, their style, and their choices combine to give a glimpse of their daily life. Unfortunately, just about all of the built history of the Lawrence family is gone. Their storefront and plant at Third and Chestnut are gone. Their house across the street is gone. The Laura Sterrett boarding house is gone. The Reed House Hotel is gone. The long-time home of Earl Lawrence, which then became Ada Lawrence's home on Front Street, is gone. This architectural loss stands as a sad reminder: we wouldn't have to work so hard to remember and record the heritage of our town if we were able to walk past it every day and see the history with our own eyes.

Historically, the neighborhood where the Lawrence family lived for generations was referred to as New Jerusalem. It was established pre-Civil War by abolitionist William Himrod. He created the neighborhood by giving free Black people and destitute whites affordable tracts of land with the agreement that they would build a home there. He also established a church and a school for the residents' use. This revolutionary idea created a foundation on which a future was built for so many people in Erie.

My family and I live in the Lawrence family's neighborhood now, and while the area has changed both geographically and demographically since the New Jerusalem days, one can't help but notice an increased effort to honor and represent that heritage in the neighborhood that is now known as the West Bayfront. Anna Frantz, director of Our West Bayfront, comments that while a lot of the built history of New Jerusalem is gone, its legacy still lives on in the neighborhood that evolved from it: "A community determines for itself what type of place it wants to be. The original settlers of New Jerusalem had the goal of creating an integrated neighborhood that would be welcoming to all, and their success in that endeavor lives on to this day." Frantz mentions efforts to incorporate the community's heritage into the current neighborhood through the use of public art, historic signage, and historic walking tours, some led by Johnny Johnson himself.

While built and recorded history in Erie omits much from the perspective of African Americans, there are those now striving to research and record it, and help make these early Black experiences part of our public knowledge and celebrate Erie's own Black heroes. Emma Lawrence may have just been doing what she needed to in order to survive, but through her courage, intelligence, and hard work she was able to provide a better life for her children and grandchildren, and inspire all those who learn her story.

A Shared Heritage: A Timeline of the African American Experience in Erie County can be found at the website: sharedheritage.org